When LeBron James announced that he worked with Basketball Hall of Fame center Hakeem Olajuwon on a post move, some Miami Heat fans relished the news. The Heat don't have a player who can score consistently and effectively in the post and probably won't have one in the near future (perhaps that's what Pat Riley sees in Eddy Curry, but that's another story for another day). James, with the physical stature of Karl Malone, has all the tools to become dominant down low. He was efficient with his post game last year, but didn't use it enough.

With the help of Olajuwon, will James' added versatility make the Heat a better team? It should help; one problem that plagued the Heat consistently was that James and Dwyane Wade took turns rather than play together for the most part. The two perimeter players have similar styles of play, and they did begin to engage in pick-and-roll situations during the second half of the regular season and in the postseason. In Game 3 of the 2011 NBA Finals, Chris Bosh hit the game-wininng shot because James set a screen for Wade, putting the defense on its heels. 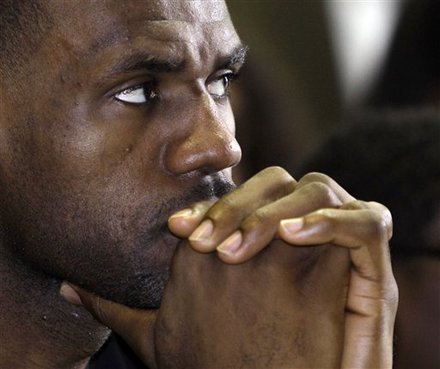 For the Heat to become an even better team, James and Wade need to become more compatible. Stationing James on the block while Wade operates from the perimeter only goes half-way. James should take on more of a responsibility in terms of ball-handling and play-making.

Since he has played in high school, people have compared James to Magic Johnson. Johnson was great because he could set up teammates like Kareem Abdul-Jabbar, James Worthy and Byron Scott unlike any other. The game's best point guard did not look for his shot; in fact, his career-high in points was 23.9 in 1986-87. James already has fantastic ball-handling ability and court vision, which is more than one can say for his skills in the post. The two-time MVP would have to sacrifice some of the shot attempts he is accustomed to, but championship teams have players complementing each other, not becoming exercises in redundancy. Wade and James could dominate games simultaneously if Wade was the first-option scorer, playing mostly off-the-ball and receiving touches from the wing with James setting up other players, scoring about 20 points a night and even having the ability to operate from the post every so often.

Some who oppose playing James at the point guard position say that having James defend opposing the quciker point guards on a full-time basis would wear him out. I am not opposed to the Heat using Mario Chalmers as the starting point guard, provided that he re-signs with Miami when the lockout ends; James would just be the point forward. Others also say that when Erik Spoelstra used James as a traditional point guard (i.e. bringing the ball up court) he had very high turnover rates. But those numbers could be attributed more to James' unfamiliarity with a new system than the fact that he had the ball in his hands.

The Heat don't have any players as talented as James is as a "point guard." Chalmers played the two-guard in college, and so did Wade. Although Wade has solid court vision and has essentially played the point for the Heat in the past, his level doesn't quite reach that of James in that department. Heat 2011 first-round pick Norris Cole played the point in college, but no one should expect much out of him, as 2011 rookies will not have the benefit of summer league or a full training camp if the NBA has a truncated season.

Several critics countlessly spoke of the Heat's problems with the point guard and center positions during the 2010-11 season. But if James works to make he and Wade fit as teammates, those critics will only have one area to countlessly poke jabs at.