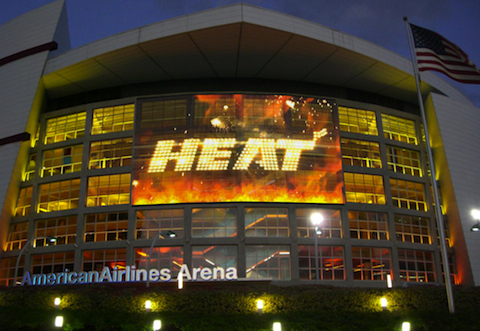 MIAMI, FL – The Miami HEAT announced its 2011-12 preseason schedule today. The eight-game schedule is highlighted by three games at the AmericanAirlines Arena, beginning with the Oct. 11 game against the intrastate rival Orlando Magic and concluding with a nationally televised game at home against the Washington Wizards on Oct. 28.

In addition to the Orlando game (Oct. 11) and the Washington game (Oct. 28), the defending Eastern Conference champion HEAT will also host the New Orleans Hornets on Oct. 24 at the AmericanAirlines Arena. For the third straight season the HEAT will also host a game at the Sprint Center in Kansas City, MO, taking onHouston on Oct. 15 in the second night of a back-to-back set with the Rockets. Miami will also play road contests at Houston (Oct. 14), at Memphis (Oct. 20) and atDetroit (Oct. 26) and take on the Charlotte Bobcats in a neutral site game in Raleigh, NC, on Oct. 19.

Although the Miami HEAT has sold out of its existing season ticket inventory for the 2011-12 season, HEAT fans can purchase a HEAT Priority Access Club membership – an annual, fee-based membership which guarantees priority on the Season Ticket Waiting List as well as presale opportunities for the All You Can HEAT Partial Ticket Plan, individual game tickets and other benefits. Only one HEAT Priority Access Club membership may be purchased per person, per household to give as many HEAT fans as possible the opportunity to enjoy the excitement of live HEAT basketball. Inventory is subject to availability. For more information, including all terms and conditions of membership, please visit HEAT.com. Individual tickets to the preseason games played at the AmericanAirlines Arena will go on sale at a later date.

Six of the HEAT’s eight preseason games will be televised. Sun Sports, who will broadcast all games in high definition, will carry the contests on Oct. 11th againstOrlando, Oct. 14th at Houston, Oct. 24th vs. New Orleans and Oct. 26th at Detroit. TNT will carry the HEAT’s Oct. 20th game at Memphis and ESPN will air the final preseason contest against Washington on Oct. 28th. In addition, all preseason games can be heard on WAXY 790AM, while the games on October 11th, 24th and 28thcan be heard on WQBA 1140AM in Spanish.

The preseason schedule is as follows: