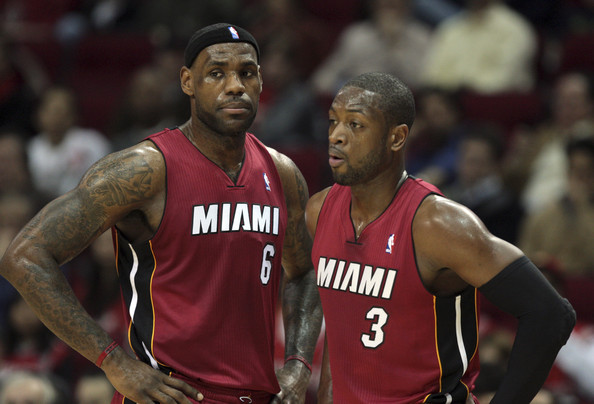 Last week Dwyane Wade went on ESPN Radio and spoke about the perceived chemistry issues between he and LeBron James. To his credit, Wade said all of the right things. On Friday afternoon the blogosphere got a hold of the comments, with two major outlets in particular catching my attention. Kelly Dwyer of Yahoo!’s great Ball Don’t Lie blog was harsh towards the Heat’s offense, claiming that it made a "mockery of the game." Zach Lowe of Sports Illustrated’s The Point Forward took things in a little different way, and insisted that the overlapping skills of Dwyane Wade and LeBron James ultimately led to the Heat’s postseason downfall. Neither comment is wholly correct or incorrect, they're opinions, just ones I don't particularly agree with.

There is no doubt that Dwyane Wade and LeBron James have very similar games.  As your eyes might tell you, both are perimeter-oriented slashers with suspect range.  Wade and James seem to score from many similar spots on the floor in many similar ways.  Here’s a look at their offensive games according to Synergy Sports: 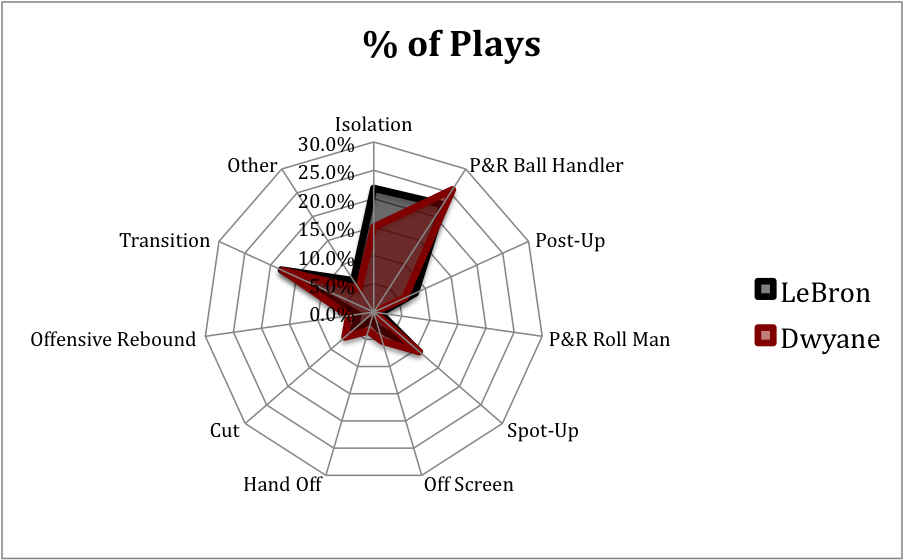 This radar graph (something I’ve used before on this site) shows the different ways Wade and James score their points.  Notice the basic shapes are both the same.  James uses the isolation game more than Wade, and Wade uses the pick and roll more than James.  Combined, LeBron James uses isolations or P&R ball handler situations about 43% of the time, Wade uses them roughly 40% of the time.  Their two games are almost mirror images of each other, at least in their play choice.

Next, let’s take a look at shot locations that each of the players used over the course of the 2010-2011 season (data found at HoopData.com): 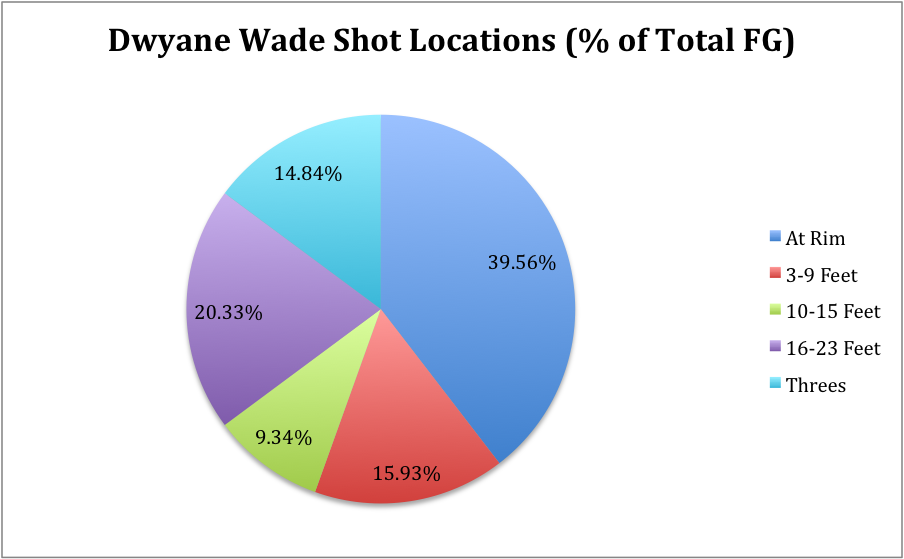 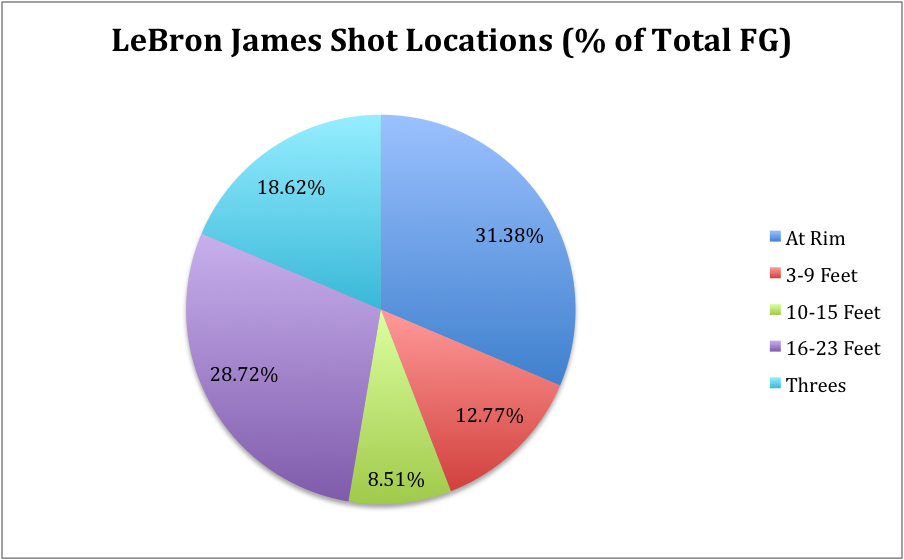 Looking at these charts, the one thing that pops out is LeBron’s number of long twos compared to Dwyane.  LeBron shot a remarkable 45% from 16-23 ft this season, so it’s hard to really ask much more.  On the whole though, we see a similar trend.  Dwyane Wade and LeBron James have very similar games.  They like the same plays and the same locations on the floor.  Both the Yahoo! and SI pieces agree on this, and it’d be foolish to dispute it.

Can They Play Together

The question of whether LeBron James and Dwyane Wade can play together or not at this point is trite.  The short and simple answer is YES.  The overlapping skill sets mentioned above do limit the Heat offensively to a degree.  It would be great if Wade or James were to develop a deadly three point shot, but the reality is that it’s probably not coming.  Still, despite their similarities, Wade and James led the Heat to the league’s third most efficient offense in the regular season.  The Heat scored 111.7 points per 100 possessions according to basketball-reference.com.  That mark bested more “fluid” offensive teams such as New York, Dallas and Phoenix.

In the Yahoo! piece, Kelly Dwyer bemoans the “my turn, your turn-styled basketball.”  I understand Dwyer’s point.  We expected Showtime Part 2, but never really got it.  With the exception of some miraculous open court plays, the Heat were fairly grounded all season.  Still, they were able to best every offense in the league but two.  What were the results when Wade and James were on the floor together? I’m glad you asked.  The Heat played a total of 2,242.5 minutes of game action with Wade and James on the floor together.  In those minutes, the Heat posted an offensive rating of 115.2.   That mark would be tops in the league this season, the second best rating of the last decade (arbitrary endpoint alert!) behind only the 2010 Phoenix Suns.

The question the Heat face is whether to sacrifice efficiency in the name of fluidity.  Realistically the offense cannot get significantly better, especially when the Heat focus so intently on defense.  It is commonly assumed that the Heat’s chemistry will improve in the future, but its effect on the bottom line may end up being negligible.  The fact of the matter is that most nights Wade and James can take their defender one on one or coming around a screen.  It’s hard to limit those opportunities.

The “my turn, your turn” issue regularly brought up is increasingly frustrating.  As I joked on twitter, are they supposed to shoot the ball at the same time? One hand each?  One “my turn, your turn” sequence that sticks out to me occurred in the first round against the Philadelphia 76ers.  The Heat’s offensive philosophy of the first two games was based on whom Evan Turner was covering.  That man got the ball and took Turner to school. “My turn, your turn,” sure, but it was also effective.  The opposing team inevitably determines what an offense is going to do and who will get the ball.  Having two of the most skilled players in the world creates mismatches that must be exploited.  Sometimes sharing isn’t caring.

Wade and James did make changes to their games this season.  To illustrate it, here are more radar graphs which each players’ 2010 and 2011 seasons: 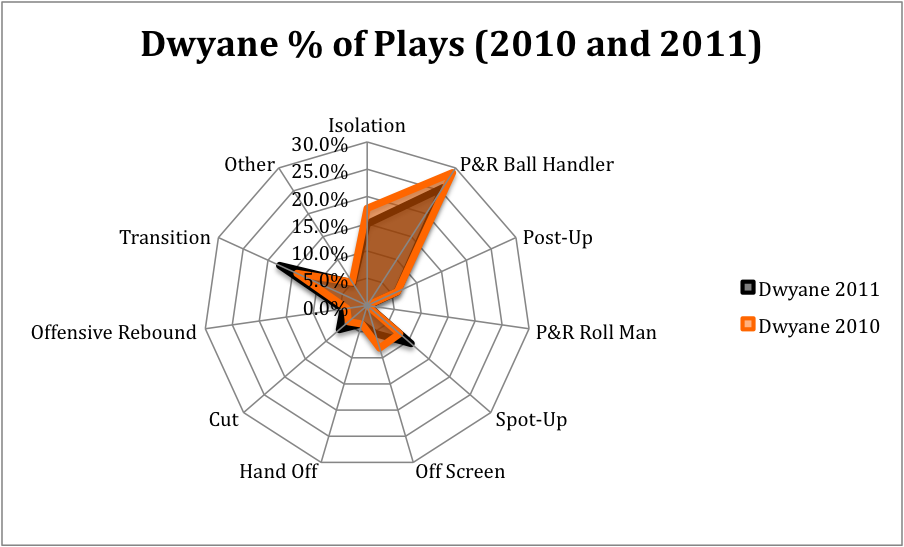 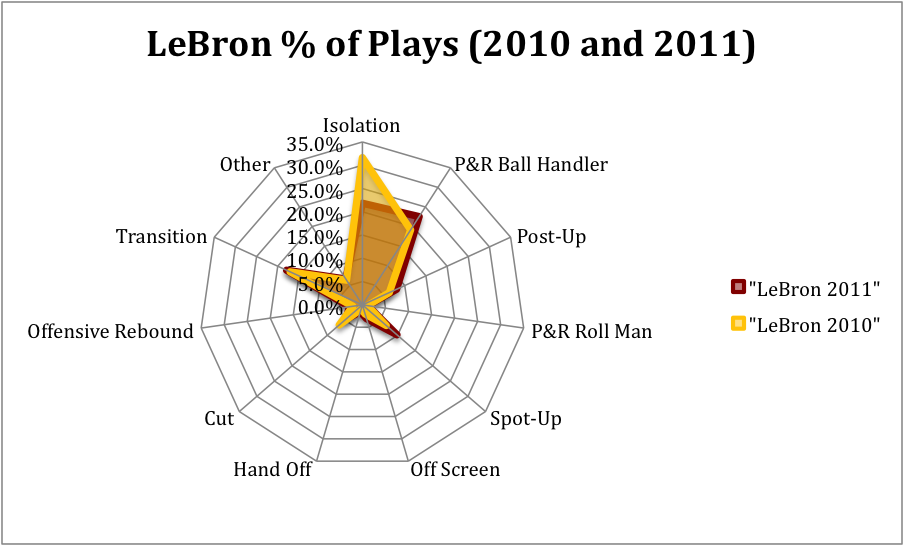 Dwyane Wade’s charts show a slight decline in his isolation game and P&R ball handler numbers, and an increase in cuts, transition baskets, and spot ups.  Most differences are a result of no longer being the primary ball handler.  That’s what makes LeBron’s chart so interesting.  His offensive game changed drastically in 2011.  Isolations accounted for 31% of James’ offense in 2010 but dropped to 21.8% in 2011.  For all the talk of LeBron not developing a multifaceted offensive game, he did change significantly in the last two years.

So Dwyane and LeBron are similar players who do similar things.  They also were offensive juggernauts together on the floor.  So what happened in the playoffs?

The SI piece focused on the Heat’s playoff deficiencies on offense and placed much of the blame on the overlapping skills of Wade and James.  This hypothesis cannot be totally discounted, but it may be a little bit harsh.  Lowe writes:

“But the playoffs, with a slower pace, fewer transition chances and better overall opponents, provided evidence that much work remains before the Heat figure out how all their parts best mesh. Miami averaged only 106.4 points per 100 possessions in the playoffs, down from 111.7 in the regular season.”

Lowe’s statement isn’t without merit.  Playoff basketball does slow down, it does limit transition opportunities and it does pit teams against other elite defenses.  However, the Heat’s playoff road in 2011 was a little different than most other Finals teams.

Here’s the last 20 NBA Finals participants (more arbitrary endpoints!) and the average defensive rating of their playoff opponents (four teams in all):

The Heat fare an unremarkable ninth in this list.  As you can see, the teams listed above the Heat on the list all played in the early 2000s, an era of stronger defense.  Here’s a different way of looking at the same data, by using the average league rank of a team’s defense: 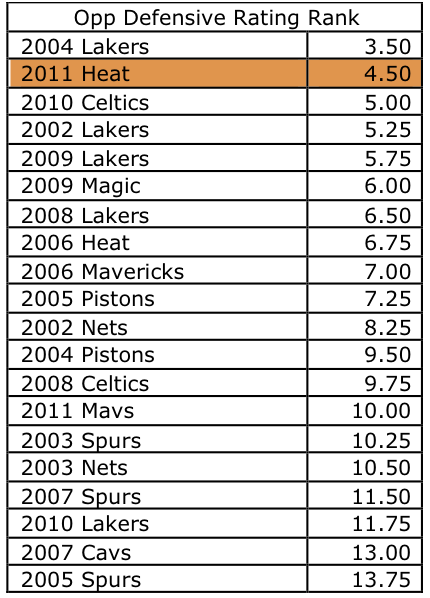 Clearly, the Heat had an irregular postseason run.  They played the 76ers (8th), Celtics (2nd), Bulls (1st) and Mavericks (7th).   The only tougher run was the one experienced by the 2004 Lakers who faced the 5th, 1st, 6th and 2nd ranked defenses in succession.  Here’s how the teams with the five hardest slates had their offenses change:

The Heat’s differential is the biggest of the group, but no team at the top of the list fared much better.  Obviously, the tougher the defenses, the worse the offenses fared.

Factor in the Heat’s supporting cast and it’s not hard to see why the offense struggled.  Mike Bibby shot 28.1%, Udonis Haslem shot 39.7%, Joel Anthony shot 36.7% and Mike Miller shot 34.0%.  When the Heat stopped playing Zydrunas Ilgauskas and James Jones, and replaced them with Joel Anthony and Mike Miller’s remains, the offense had very little chance to survive.

I can stomach Zach Lowe’s notion that Wade and James’ overlap led to some offensive struggles, but I don’t think they even begin to explain the Heat’s dramatic drop in offense.  I think that can be directly attributed to both competition and personnel.

So where does this leave us?  In the same spot the Heat were in last year.  Dwyane Wade and LeBron James will not suddenly grow complimentary games overnight.  For better or for worse, they will remain similar players.  However, this doesn’t mean they, and the Heat, cannot be successful.

Had the venomous regression snake not bitten Mike Bibby, had Mike Miller had the use of one of his thumbs, much less two, had Brian Cardinal not injured Dwyane Wade or had LeBron made one of his hero shots in Game 2 this whole discussion would probably be moot.  As it stands, the Heat have to take their medicine.  The reality is the Heat will never be what most people want them to be, but that’s because they aren’t going 98-0, Dwyane and LeBron will never “go together like lamb and tuna fish” and LeBron James will never be a mix of Michael Jordan, Magic Johnson, Shaquille O’Neal and Zeus.

Sincere thanks to Mosi Platt and Tom Haberstroh for hooking me up with some numbers I had a hard time finding. Follow me on Twitter @DannyMartinez4.