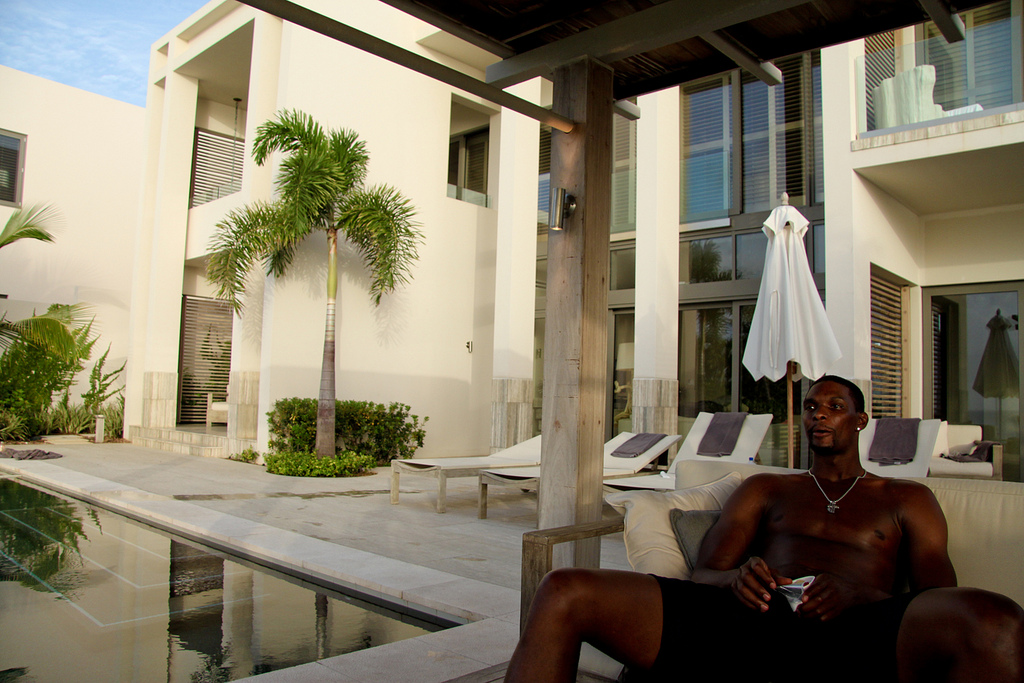 With plenty of time to spare during the offseason/lockout, Chris Bosh is getting some work done...on his back. Courtesy of his blog Lost In The Willderness, William Nguyen reports how he was flown to a remote location in Anguilla along with a tattoo artist named Adam who has been working for 40 hours inking Bosh's back and has about 20 more hours to go before the piece is finished. Only pieces of the work are shown as it isn't finished but we can already tell the tattoo is not of the Sistine Chapel. Should Nguyen not be able to capture the complete artwork, I'll try to get a picture of it myself next time Bosh is in the Heat locker room (whenever that will be). 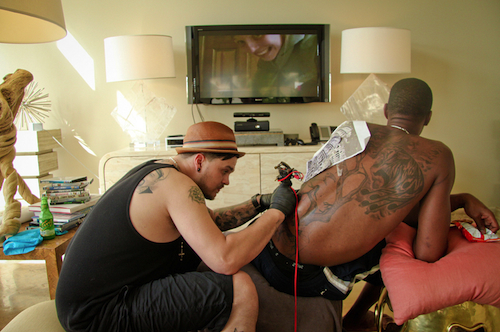 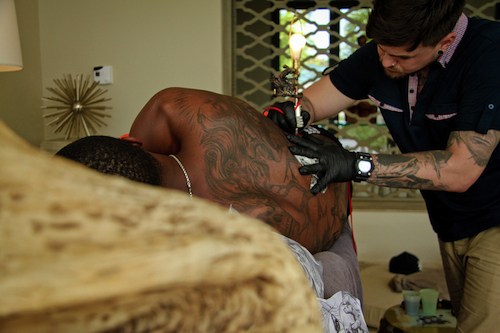 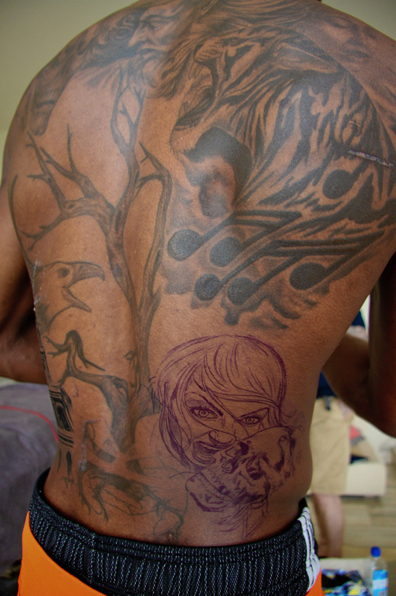 In more Big 3 news, LeBron James held his annual bike charity event in Akron, Ohio and made some interesting comments to the press. Mostly they're interesting because the offseason represents a time where we're not privy to his daily thoughts but he did reveal some juicy tidbits, such as his outlook that the lockout will end shortly...

"I'm optimistic that we will have a season this year," James told ESPN reporter Rachel Nichols. "Very optimistic.

"I'm preparing for an NBA season. I'm preparing for there to be a training camp in the next month. I'm very optimistic that Billy Hunter and the owners and David Stern will figure out a way to come together and for us to have a season. And I'll be ready for it."

...on his offseason workout plan...

"Right now I've just been focusing on being a better player, working on my game every single day," James said at a news conference before the AP interview. "Like I said, the Dallas Mavericks were a great team and they deserved to win that championship. And I'll just use that as motivation coming into this season."

...that he's working out with former Houston Rockets legend Hakeem Olajuwan on some post moves...

"I'm doing whatever it takes to just become a better basketball player," James told ESPN's Rachel Nichols. "Just everyday just trying to critique my game -- seeing ways that I can get better so I can be more of a complete basketball player on the court, a better leader on and off the court and continue to work towards my goal of winning an NBA championship."

"I look at what he was able to do throughout his career," James told the AP about working with Olajuwon. "Unbelievable talent. Multiple champion. Just to see how he was able to dominate in the low post, for me as an individual, I just try to look at some of the things I feel I need to get better at and hit home at it. Our team becomes better if I continue to get better and that's what it's about."

...his thoughts on joining the USA team for the Olympics...

"I love representing my country and doing it the way I love to do it and that's playing the game of basketball," James said. "So I would love to be a part of the 2012 team traveling to London and defending our gold medal."


Everyone continues to be offended by the year-old Decision show and its aftermath, the show did generate a lot of money for the Boys & Girls Club and the kids that are part of the program continue to reap the benefits from it. While in Akron, James opened a new $240,000 clubhouse for the local chapter of the organization using the Decision funds.


In more good news, James will be inducted into his high school's Hall of Fame tomorrow night...

The core of the St. Vincent-St. Mary boys basketball team that won three state championships in four years will be inducted into the school's athletic hall of fame on Wednesday during ceremonies at the Akron school.

The event will take place in the school gymnasium at 7:30 p.m. and is open to the public. A private pre-induction reception will begin at 6:30 p.m.

James, Cotton, Joyce and McGee were childhood friends and played basketball together from grade school through high school. After going 27-0 and winning the Division III state championship as freshmen, they were joined by Travis during their sophomore year and went on to win two more state titles. They were Division II state champs and mythical national champs during their senior season. In the four seasons their record was 102-6.

Their story went on to become the subject of a documentary, "More Than a Game."


To go along with that, Milwaukee reporter Gery Woelfel has this rumor in his column for the Racine Sports Zone:


I've heard Milwaukee Bucks management approached Michael Redd before the lockout about returning for another season, although my impeccable sources insist he's going to wind up with one of the Eastern Conference's title contenders.


For more thoughts on why Redd playing for the Heat makes a lot of sense, check out Diego Quezada's post from back in June.