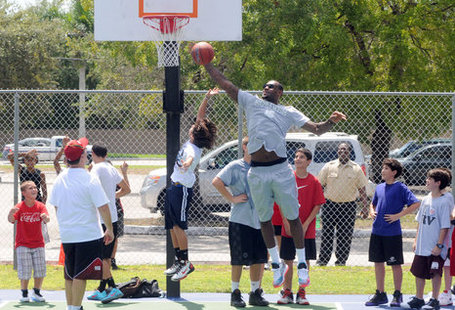 LeBron James was back in South Florida on Saturday to make a quick stop and surprise some very unsuspecting young ballers.  The Boys and Girls Club of Miami-Dade, located in Kendall, was dedicating their newly renovated basketball court presented by Sprite's Spark Park Project on Saturday.  There were plenty of kids on hand for the event, but little did they know they'd be getting a visit from King James himself.  Said LeBron:

"They had no clue.  And those are the best ones, when you get those reactions right off hand.   Any time I'm able to be in this position I kind of just live for it."

There were a lot of youngsters on hand to participate in a clinic, which took place on the newly refurbished basketball court, and to say they were in shock to see LeBron James come out to greet them would be a gross understatement.  It's a great thing that the kids were so happy, just as its great that James was equally happy to be out there with them.

LeBron discussed with the kids how important it is to participate in youth sports, telling them how he played in public parks when he was young.  James stuck around to shoot baskets with the kids who ranged from 5 years old to 15, and while the younger kids seemed to really enjoy themselves, some of the teenagers were seen with tears in their eyes when LeBron popped out.

"It's overwhelming to be in a position I'm in to be able to give back to the kids.  These kids get to benefit from it long after I'm done playing basketball."

Of course James was speaking of the new court, as well as the $15,000 donation by Sprite Spark Parks Project and the beautiful wall mural painted by David ‘Lebo' LeBatard, brother of famed South Florida sports journalist Dan LeBatard.

The lucky kids from the Miami-Dade Boys and Girls club weren't the only ones on the court on Saturday.  Miami Heat guards Dwyane Wade and Mario Chalmers got together for a workout, and LeBron was asked about the possibility of working out with his teammates:

"As far as team workouts, we haven't spoken about it.  I know D-Wade and 'Rio got an opportunity to work out today and I'm going to link with those guys in the next few days to try to get a workout in.  I mean we would love to.  I think at the end of the day, it's about just communication, hopefully guys will be in the same city, just try to get better."

Of course, before the media was done talking to James, he had to be asked the obligatory questions about the NBA lockout.  As he has done in the past, LeBron expressed optimism about a deal being reached and said that when the time comes to play ball again, he would be prepared.