Share All sharing options for: Heat Players Not Committing To Playing Overseas 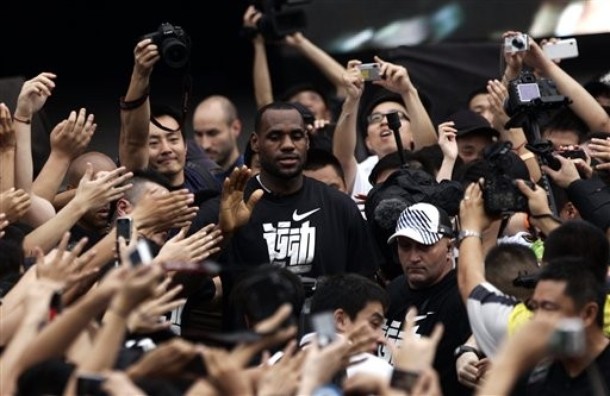 Seemingly almost the entire Denver Nuggets team has left to play in China.


Kobe Bryant is flirting with playing in Italy or in Turkey.


The New Jersey Nets paid the Utah Jazz handsomely for acquiring the services of All- Star point guard Deron Williams only to now see him ply his trade in Turkey and risk injury in an aggressive league (to say nothing of the prisons they have there).


Yet, not a single player from the Miami Heat to date has even been rumored to be looking elsewhere, let alone sign on the dotted line of any contract. The only player on the team that has considered the possibility has been Dwyane Wade, who has maintained he would keep his options open even while Chris Bosh and LeBron James have publicly declared they don't envision themselves playing overseas. You would think Jamaal Magloire or Joel Anthony would want to go back home and shake off some of that rust up North but we haven't heard a peep from them either. (And no, I'm not counting players like Robert Dozier whose NBA rights are owned by the Heat).


The deals being offered at this point won't make any of them forget about their potential Heat paydays, whenever those should resume again, but the fact remains that it's probably better to get a paycheck to bounce around a basketball in any arena than getting nothing sitting at home, more so for the journeymen that populated the Heat bench that have no assurances of continuing their career in the NBA once the league resumes play.


Regardless, the Heat remain one of only six teams along with the New York Knicks, Los Angeles Clippers, Indiana Pacers, Oklahoma City Thunder, and the Memphis Grizzlies to have none of their current players, free agents or draft picks to sign deals elsewhere. I know what you're thinking and I don't know why any Clippers players have left either.


The biggest losers are the above-mentioned Nuggets with an astounding six players playing elsewhere while the Atlanta Hawks, Philadelphia 76ers, and the Nets have four players each.


Should the Heat players remain unified and in shape during the lockout, the team would certainly have an advantage should the season start up either on time or in an abbreviated form. Even more intriguing, some of the players that have signed to other leagues are free agents and have opt-out clauses which means they will want to latch on to playoff contenders. Others like Kenyon Martin will play out their seasons with their new teams and could still be potentially available to join an NBA team before the playoffs begin.


Unfortunately, Chris Quinn has signed on to play in Russia with no opt-out clause for one year so don't get your hopes up for his return any time soon.