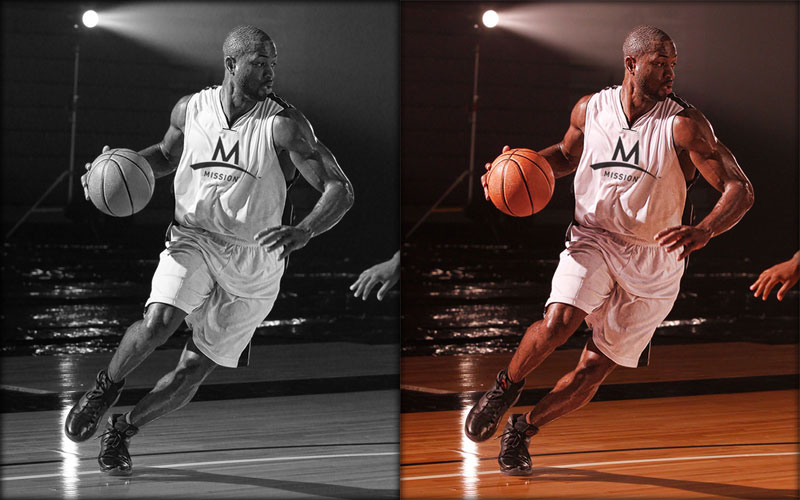 We always see players constantly licking the bottom of their shoes, stepping on large translucent sheets of sticky plastic before stepping out on the court and wiping their shoes with their hands while waiting for their teammates to sink free throws. Court traction has and always will be a problem for basketball players and Dwyane Wade is looking to do something about it.


Wade and Mission AthleteCare have now officially launched Court Grip™, a revolutionary product that is scientifically engineered to enhance traction and combat the negative effects of dusty, worn-out courts.


Check out the video below as well as the full press release after the jump for more info on Court Grip™ and what it can do for your game.


NEW YORK, September 28, 2011 – Today, Mission Athletecare™, the world's first and only Athlete-Engineered™ company, will change the game of basketball when it unveils its revolutionary Court Grip™ product, a proprietary, patent-pending formula that is scientifically engineered to enhance traction and combat the negative effects of dusty, worn-out courts.

Since the inception of basketball in 1891, there has been one major issue plaguing players at all levels of the game: lack of court traction. Not only do dusty, worn-out courts dramatically hinder performance, but they can also increase the risk of injury. Players have long tried to combat this pervasive problem with unsanitary habits like spitting in their hands and incessantly wiping their soles, but nothing has worked – until now.

Approved for play at high school, college and professional levels of the game, MISSION Court Grip™ went through 3+ years of extensive R&D, as well as significant independent studies and testing by leaders in the field of sports performance. Co-developed by a team of world-renowned scientists and engineers who specialize in the areas of nanotechnology, rubber substrate performance and tire traction, and extensively tested by seven-time NBA All-Star and MISSION Athletecare™ partner Dwyane Wade, Court Grip™ is poised to revolutionize the game of basketball as we know it today.

Wade, known for his signature slashing and aggressive style of play on both sides of the ball, has been challenged by court slippage throughout his entire career, and jumped at the opportunity to join the team to play an integral role in the development of the most effective and sustainable solution ever created. Wade personally tested dozens of different formulas and application methods during the 2010-2011 regular season and playoffs, before arriving at the final product being unveiled today.

"My game is all about traction - all about change of direction. When I step on a dusty court, I feel like I can't make the moves I want to make. Plus, I'm more at risk for injury. When I put on MISSION Court Grip, it gives me the confidence to play my game, regardless of the court's condition," said Dwyane Wade. "It's been amazing to see how fast Court Grip has caught on with other guys in the league, as well as with the college teams. I've never seen a product like this – directly addressing such a major problem for athletes...it's already changing the game."

Court Grip™ is packaged in an eight ounce bottle that athletes apply via sponge applicator to the soles of their sneakers, providing instant, sustained traction. Its proprietary, pressure-sensitive nanotechnology is designed to activate when a player makes a cut – and gives an athlete the ability to make quicker moves, be more explosive when changing direction, and play with increased confidence.

The issue of court traction is widespread through all levels of play. Through a partnership with Pace University, MISSION conducted an extensive national research survey with basketball players and coaches of all levels to assess the size and scope of the court traction issue and the desire for a product to address the need. The results were conclusive as 82% of basketball players considered court traction to be the number one issue impacting the game of basketball, and 90% of coaches felt court slippage is a safety concern for their players. Of players that tested Court Grip, 95% said it gave them much better traction than anything they have tried in the past. Legendary college coach Jim Boeheim said, "Court Grip works better than anything we have tried for court traction. It is a revolutionary product."

"With over 30 million active basketball players in the U.S. alone, we saw a real void in the marketplace for a product that truly enhances court traction. After 3 years of product development and market research, we are thrilled to finally bring this proprietary technology to the entire basketball marketplace," said Mark French, inventor of Court Grip and President of MISSION Basketball.

For its initial launch this Fall, Court Grip™ will be sold exclusively at Foot Locker nationwide and on Eastbay.com at a $14.99 SRP. Foot Locker will prominently market Court Grip™ in all 1,142 stores with a dedicated merchandising unit positioned adjacent to the basketball sneaker wall. Stores will also feature high profile window displays and custom Dwyane Wade videos.

"Foot Locker is thrilled to be the exclusive launch partner of Court Grip as we look to enhance our position in the marketplace as the definitive home for basketball innovations," said Jake Jacobs. President and CEO of Foot Locker, Lady Foot Locker, Kids Foot Locker and Footaction. "Each day we hear our consumers voice their concerns about the issue of court traction, and this revolutionary product will provide them with the answer."

Launched in 2009, MISSION Athletecare has quickly become a driving force of innovation in the sports industry. Uniquely focused on products that help athletes prepare, perform and rehab from competition, the company has over two dozen products across muscle care, foot care, anti-chafe, grip and sun care categories, sold in 10,000 retail locations in the U.S.

"As the pioneer of the Athletecare category - MISSION Court Grip is the perfect example of the revolutionary product innovations we're committed to introducing in the market to solve problems unique to athletes. With Dwyane at the helm of the R&D and testing process, this launch is a true reflection of the Athlete-Engineered™ approach we take with our athlete partners," said Josh Shaw, Founder and President, MISSION Athletecare. "We're looking forward to a tremendously successful launch of Court Grip this Fall, and following it with some equally exciting game-changing innovations coming in the months ahead."

MISSION is the first and only line of Athlete-Engineered products designed to enhance performance in training and competition.

MISSION was co-founded by a premier group of world-class athletes including 13-time Grand Slam Tennis Champion Serena Williams, 7-time MLB All-Star David Wright and Gold Medal Soccer Champion Mia Hamm among others, all of whom wanted to be part of the solution to the void of Performance Care products available to athletes in the marketplace.

MISSION and its elite athlete partners know that people who lead an athletic lifestyle have different personal care needs – before, during and after their training or competition. To meet these dynamic needs, the MISSION Lab Team is led by world-renowned doctors, scientists and athletes – who collaboratively engineer the MISSION products to meet the highest demands of performance. From a sunscreen that is clinically proven to not sting your eyes to a proprietary Anti-Friction Cream that lasts up to five times longer than the competition, MISSION is focused on true product innovations that are unmatched in the marketplace – and give athletes the edge they need.

Today, MISSION has over 25 high-performance product innovations in its portfolio and is sold in nearly 10,000 stores across the U.S. including Dick's Sporting Goods, Foot Locker, Hibbett Sports,
CVS/pharmacy and on missionathletecare.com.

The company also has a dual MISSION. While delivering world-class product innovations, MISSION also makes an impact off the field of play through The M Foundation, which promotes the health & safety of youth athletes and recognizes and rewards high school athletes that give back to their communities. MISSION is setting a new standard in "high-performance" on all levels.