LeBron Ready For Season To Start, Works Out With Norris Cole

Share All sharing options for: LeBron Ready For Season To Start, Works Out With Norris Cole 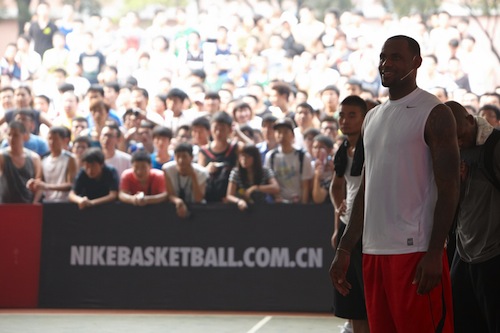 LeBron might as well be an official Globetrotter these days with a full schedule that includes taking part in pro-am leagues throughout the country, wrapping up his Asian tour and giving Miami Heat rookie and future teammate Norris Cole a call to play some ball together and get a head start on the season. This was Cole's first interaction with a Heat teammate and it wasn't long before he met another one, as reported by Sun-Sentinel's Ira Winderman.

"He welcomed me to the family, the Miami Heat family," Cole said Wednesday. "He found out I was in the area. He asked if I wanted to come work out. He said I could come work out any time he's in the area, and I said, 'OK,' and I took advantage of it."

Together, the two ran drills, with James filling in Cole on the Heat' approach. Until that session, Cole said he had not met another member of the team since he was drafted in June.

"It was good just to see how he worked out, how serious he takes the game," Cole said. "Reaching out, it shows how sincere of a person he is, of a teammate he is."

Cole then met a second potential Heat teammate Tuesday, when he played alongside Heat free-agent point guard Mario Chalmers in a pro-am game in Indianapolis.

"It was great meeting him, it was my first time meeting him," Cole said. "We got along real well, made some good plays together out there on the court."

Speaking of the NBA season, in an interview session with Asian media, LeBron continued to be as optimistic as Roger Mason (allegedly) is that it would start on time and given the frequency in which meetings between the players and the owners will ramp up, the Heat forward hopefully could be right. LeBron also expressed confidence that another year together for the Heat roster to jell should translate into postseason success. All well and good, but a decent point guard and big man would also help quite a bit.