Share All sharing options for: Heat Blow By Bobcats 129-90

After LeBron James popped the question to longtime girlfriend Savannah Brinson with his teammates nearby, some may have worried that the Miami Heat players would come out lethargically for Sunday’s game against the Charlotte Bobcats. The Heat played lackadaisically in their game against Charlotte last week, and Miami had a 20-point deficit Jan. 1, 2011 before rallying to defeat the Golden State Warriors. This time, the Miami players came out sharp and their opponents looked hung over from a night of partying. 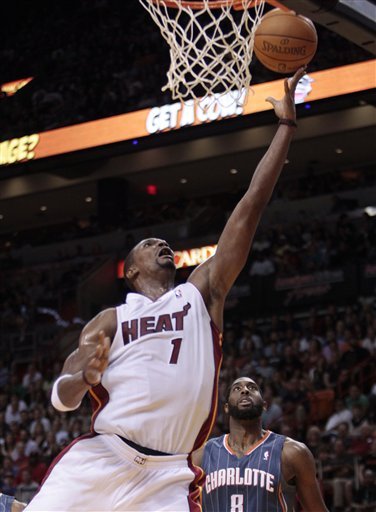 After squeaking out a one-point win against this young team last Wednesday, the Heat shellacked Charlotte 129-90 for the team’s first 5-0 start in franchise history. Miami led throughout the entire game, overcoming a quiet first half from James to build a 29-point lead by halftime.

Ever since that abysmal game against Dallas, Chris Bosh has played well. Wednesday night was no different as Bosh attacked from the opening tip, scoring nine first-quarter points. He finished with 24 points on 9-of-13 shooting and a perfect 6-for-6 from the foul line and 10 rebounds. Bosh did try to lead a fast break with Dwyane Wade and LeBron James ahead of him, though, ultimately getting an offensive foul call. Although Erik Spoelstra may have asked Bosh to extend his range to the 3-point line, the 6-foot-11 power forward should not act like a point guard.

Wade added 22 points on 9-of-16 shooting from the field and six assists. The Heat’s all-time leading scorer passed the 14,000-career point plateau and passed the 3,500 mark for assists Sunday. James had just four points during the first half partly due to early foul trouble, but recovered nicely to finish with 16 points, nine boards and five assists. In the third quarter, Wade launched a pass from the opponent’s free-throw line for a James layup. On Miami's ensuing possession, James returned the favor, connecting with Wade for a dunk.

The Heat’s first 20+-point victory of the season gave the Heat’s three stars valuable rest. Miami will play four more games this week, so keeping Bosh, Wade and James on the court for fewer than 30 minutes each will allow them to come out fresh for upcoming games against Indiana and Atlanta. The Heat even played a few minutes with none of the Big Three on the court in the first quarter.

After losing the rebounding battle by 23 in these two teams’ first meeting, the Heat out-rebounded the Bobcats 47-40 Sunday. Udonis Haslem had nine boards off the bench in what is becoming a great rebounding season for him – he’s averaging more than nine boards per game so far. The Heat also struggled last week against the point guard play of D.J. Augustin and Kemba Walker, but Miami held Augustin to 1-for-11 shooting in the American Airlines Arena. Mario Chalmers and Norris Cole both played very well, combining for 32 points and 14 assists.

Miami’s deep reserves – Terrel Harris, Mickell Gladness and Dexter Pittman – also received some playing time. Pittman played well in his limited minutes, making a nice hook shot and later dunking the ball. Pittman needs to lose some more weight if he wants to eventually crack the rotation with the Heat’s athletes, though. Harris also showed some of his talent, scoring nine points. Gladness made a jumper and grabbed four rebounds in eight minutes.

Standing as the only undefeated team in the East, the Heat will try to improve to 6-0 tomorrow with a home game against the Atlanta Hawks at 7:30 p.m.