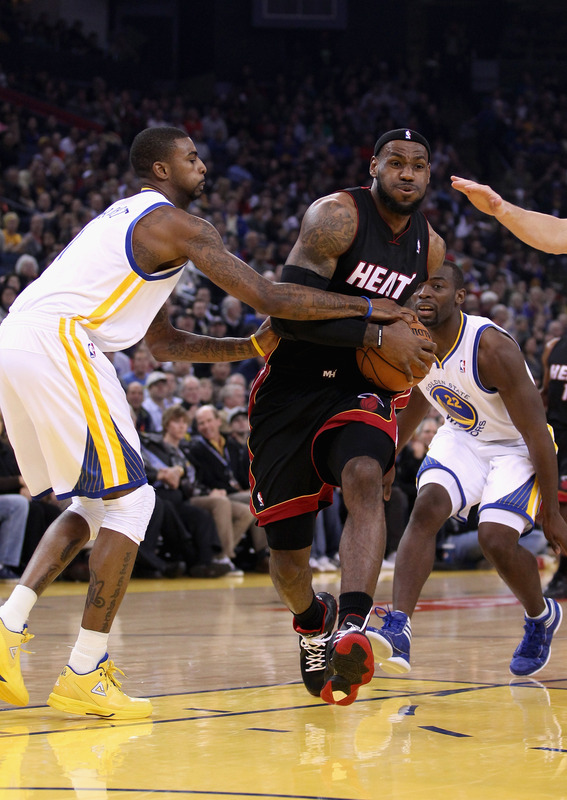 The Miami Heat appeared to be coasting to a 9-1 start when Mario Chalmers's three-pointer gave them a 78-61 lead late in the third quarter. Then the wheels fell off.

The Golden State Warriors, sparked by Nate Robinson's 24 points off the bench (15 of which came in the fourth quarter), erased that massive deficit and stole a 111-106 victory over the Heat in overtime.

Dorell Wright (7-for-15, 20 points) scored 5 consecutive points to give the Warriors a 107-104 lead with 1:06 remaining in overtime. Wade pulled the Heat within 1 with a jump hook, but Monta Ellis's 18-foot jumper put the Warriors up 109-106 with 34 seconds left. LeBron James's subsequent three-point attempt misfired, and 2 Robinson free throws with 5 seconds remaining sealed the Heat's fate. Robinson shot just 4-for-12 from the field but was a perfect 14-for-14 from the foul line.

Dwyane Wade returned from a 3-game absence and was outstanding, scoring 20 of his 34 points in the first half. Wade, continuing the trend of Heat superstars making impressive returns from injury, spurred the Heat to a 4-point halftime lead despite the team's sloppy first-half defense. Wade's scoring outburst followed James's 22-point first quarter against New Jersey Saturday.

Robinson hit a three-pointer, a layup and a free throw -- the result of a technical foul on Udonis Haslem -- to tie the game at 93 with 1:45 remaining. The Heat forced turnovers on consecutive Warriors possessions as Wade and James hit 3 free throws to give Miami a 96-93 with 45 seconds left. Wright's fifth three-pointer of the night (he made 6 total) with 31 seconds remaining tied it at 96. Battier and James prevented Ellis from getting a shot off as the clock wound down, sending the game to overtime.

James's statline (10-for-19, 26 points, 11 rebounds and 7 assists) would indicate that he played a pretty good game, but the fact is he was nowhere to be found during the Warriors' late comeback. He scored only 3 points in the fourth quarter and overtime and committed a number of costly turnovers late in the game. Bosh struggled, too, scoring a forgettable 17 points and hauling in just 4 rebounds.

The Heat consistently got to the foul line but failed to take advantage, shooting just 26-for-40 (65%) from the charity stripe. Golden State, meanwhile, converted 26 of their 30 free throws (87%). Miami shot 2-for-11 (18%) from three-point range and accounted for assists on just 16 of their 39 field goals. The Warriors outrebounded Miami 52-48.

The Heat will have to get over the loss quickly, as a nationally televised matchup with Chris Paul, Blake Griffin and the Los Angeles Clippers awaits them Wednesday night.