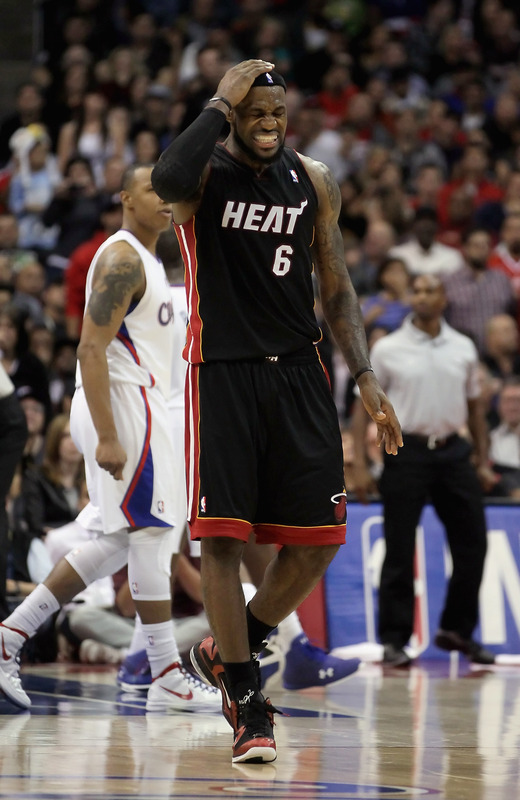 The similarities between the Heat's back-to-back overtime losses are equal parts troubling and familiar.

Plagued by the same poor free-throw shooting and late-game execution that doomed the Heat in Tuesday night's loss at Golden State, the Heat (8-3) fell to the Los Angeles Clippers (5-3) 95-89 in overtime Wednesday night.

With the Heat trailing 86-84, LeBron James (7-for-19, 23 points, 13 rebounds, 7 assists) was fouled with 16 seconds left in regulation but converted only 1 of 2. Dwyane Wade (6-for-17, 17 points, 7 rebounds, 2 assists) retained possession for the Heat by throwing the ball off DeAndre Jordan. James was fouled again, but missed the front end, tying the game at 86 with 5.1 seconds left. For the second consecutive game, James prevented the opposition from getting off a game-winning attempt, this time hounding Chris Paul into a shot that came after the buzzer had sounded. The Clippers controlled the overtime period, outscoring Miami 9-3.

A night after shooting 26-for-40 from the free-throw line, the Heat converted just 20 of their 34 attempts from the charity stripe Wednesday. The Heat made 8 trips to the line in the fourth quarter and made both shots just once.

Once again, the Heat's offense late in the game devolved into a series of haphazard isolation attempts, most of which were unsuccessful. The Heat scored just 41 points in the second half and overtime. From the 7:30 mark in the fourth quarter on, Miami shot 1-for-16 from the field, the lone make coming on Mario Chalmers' three-pointer in overtime. Chalmers had another solid game, putting in 18 points on 6-of-13 shooting while chipping in 4 rebounds, 5 assists and just 1 turnover.

Paul (11-for-21, 27 points, 11 assists, 6 rebounds and 3 steals) was everything the Clippers hoped they were getting when they traded for him prior to the season. He consistently hit big shots and got his teammates the ball in positions to score. Most of Caron Butler's 20 points came on spot-up jumpshots created by Paul's wizardry. James consistently sagged off Butler to help other teammates, sometimes unnecessarily, leading to a number of open looks for the former Heat small forward.

Both teams struggled from beyond the arc, as the Heat made just 5 of their 16 three-point attempts (31%). The Clippers weren't much better, shooting at a 35% clip while going 6-for-17. Miami outrebounded Los Angeles 50-45.

Erik Spoelstra earned his first ejection of the season with 5 seconds remaining and the Heat trailing 94-89 after the officials did not grant the Heat the intentional foul Miami was trying to commit, resulting in a dunk by Jordan. Spoelstra chased Derrick Stafford to mid-court while screaming a few well-deserved obscenities his way. In fairness, both teams were the objects of the officials' ineptitude at different junctures of the game, but Spoelstra decided to get the heave-ho once all hope of a Heat comeback was lost. The Heat will try to finish this 5-game road trip with a 3-2 record when they travel to Denver to take on the Nuggets Friday night. The game tips off at 10:30 and will air on both ESPN and Sun Sports.