Share All sharing options for: Heat To Hold Online Auction To Benefit Haiti 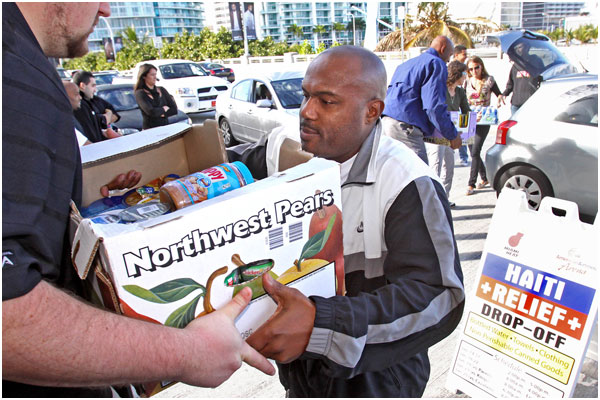 Press release from the HEAT:

MIAMI — The Miami HEAT is asking HEAT fans everywhere to "Remember Haiti" as the second anniversary of the January 12th earthquake that devastated the island nation approaches. During the team's January 13th road game versus the Denver Nuggets, coaches for both teams will wear special "Remember Haiti" ribbons. Additionally, Sun Sports will air a commemorative feature during the game broadcast.

The HEAT will also conduct an online auction beginning on Friday, January 13th at 10:30 p.m. EST. Items to be auctioned will include special game worn adidas shooting shirts autographed by the following 2010-11 players currently on the HEAT roster:

These adidas shooting shirts feature a "Save Haiti" logo which was designed last year by South Florida artist, Romero Britto.

In addition, the team will also auction one pair of autographed sneakers from each of the 15 HEAT players currently on the roster. Fans who would like to bid on these items should visit HEAT.com. The auction will end on Saturday, January 21st at 10:00 p.m. EST. All proceeds from the auction will benefit Project Medishare, a non-profit organization founded by Dr. Barth Green and Dr. Arthur Fournier that provides medical care and community development services to the people of Haiti.

HEAT Chief Executive Officer Nick Arison and HEAT Vice President of Player Programs Alonzo Mourning, who have personally delivered supplies to Haiti several times since the earthquake, recently embarked on another trip to the island nation to assist Project Medishare with their ongoing relief efforts, which now also include a growing cholera epidemic.

Project Medishare has also been working in the rural areas of Haiti for more than 17 years, where they provide comprehensive community healthcare to more than 100,000 people in the Central Plateau every year, including caring for 20,000 schoolchildren at 120 schools in rural Haiti. In addition, Project Medishare provides services in the areas of maternal and child health, malnutrition, agriculture, cholera treatment, child protection, education, HIV/AIDS, women's empowerment and clean water initiatives. For more information, please visit projectmedishare.org.