UPDATE: X-rays were negative on Dwyane Wade's ankle. He will be re-evaluated in Miami.

The Miami Heat came into a Friday night game in the Pepsi Center having lost to the Denver Nuggets nine consecutive times on the road. Although the Heat played well in spurts, a brutal fourth quarter gave Denver a decisive 117-104 victory, sending Miami to a third straight loss.

To make matters worse, Dwyane Wade sprained his ankle in that excruciating fourth quarter as he stole the ball from Al Harrington. Just coming off of a foot injury, Wade has caught some misfortune with the injury bug. Many other players have caught it – Zach Randolph, Manu Ginobili and Al Horford just to name a few – and it’ll remain a problem in this compacted 66-game season. 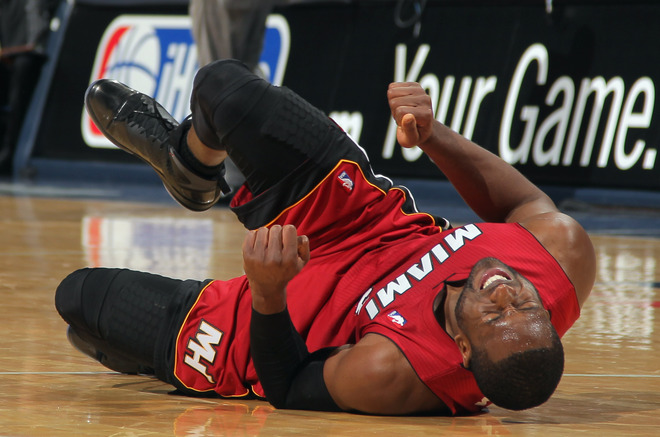 As has always seemed to happen in Denver, the Nuggets raced out to an early 28-14 lead. George Karl’s team executed several nice plays to get open 3-point shots. Miami roared back in the second quarter thanks largely to aggressive play from Chris Bosh, who struggled in the first quarter. But Denver seemed to respond to every Heat run, always remaining in control of the game. The Nuggets blew the game open in the fourth quarter, exploiting several Heat mishaps on the defensive end to stretch the lead with 3-pointers.

The Heat played for the third time in four nights, but some of the defensive lapses were inexcusable. On one fourth-quarter play, Shane Battier simply lost track of Danilo Gallinari and let him make a wide-open 3. Early in that quarter, Harrington shot an air ball, but every Heat player simply stood flat-footed and did not crash the glass. As a result, Andre Miller grabbed the offensive board and made an uncontested layup.

LeBron James played well, scoring 35 points on 13-of-20 shooting from the field and adding five assists and six rebounds. James looked uncomfortable going to his post game after Gallinari tried swiping at the ball early on, instead resorting to long two-pointers and even making his first three triples of the season. Although he made the 3-pointers, those long jumpers usually do not yield dividends. The two-time MVP also missed five free throws and committed four turnovers.

One of the few players who had a good overall game was Udonis Haslem, who registered 12 points and 11 rebounds on the night. Norris Cole added 13 points, making some nice offensive plays occasionally. Everyone else had multiple bad moments, though. Bosh attempted some completely errant shots. Wade missed some makeable shots, but perhaps his foot injury played a role in that. Mario Chalmers missed two technical free throws. Dexter Pittman received a lot of playing time, but didn’t make much of it. Joel Anthony sat out the entire second half after the burly Timofey Mozgov made some nice offensive plays on the 6-foot-9 Anthony.

Despite everything that went wrong for Miami, no one needs to panic. A wise person once told me, "Life is never as good as you think or as bad as you think." We can apply the same to sports. The Heat started last season 9-8 and players reportedly were upset with Erik Spoelstra. Miami also lost five straight games late in the regular season, constantly failing to execute plays in crunch time. When the Heat started out 8-1, they were playing far from perfect. Now that they are 8-4, the season can still quickly turn around.