Despite Wade Injury, Heat Should Get Back On Track

Share All sharing options for: Despite Wade Injury, Heat Should Get Back On Track

After the Miami Heat got off to their best start in franchise history at 8-1, the team has now hit their first snag, losing three straight games to close this January road trip. Miami had control for most of the games against the Golden State Warriors and Los Angeles Clippers, and Chris Bosh accurately said that his team came into the game against the Denver Nuggets with the wrong mindset. 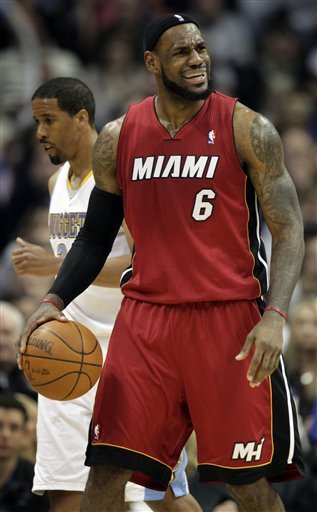 Upon closely following the Heat’s 2010-11 season, it should come as no surprise that some pundits have already gone back to the criticisms of last season. ESPN’s Chris Broussard said that the Chicago Bulls are mentally tougher than the Heat right now. Apparently, 12 games into a compacted NBA season can turn the Bulls from a clearly weaker team than the Heat to a superior team. Despite the fact that the Heat have a lot to improve on, the players and coaches can still turn the season around.

Dwyane Wade’s health stands as the biggest concern for this team. He injured his toe during the third game of the season and later missed three consecutive games. Wade looked like he was in significant pain after he sprained his ankle against the Nuggets last night. X-rays were negative, and the two days off the Heat have before their next game should help. Although Wade has played mostly injury-free for the past three seasons, he undoubtedly stands as the member of the Big Three with the longest list of injuries. Now nearing his 30th birthday, Wade should completely heal all of his lingering ailments before returning to the hardwood.

It’s tough to gauge what the Heat will get from their two other injured players, Mike Miller and Eddy Curry. Miller played well in spurts against the Chicago Bulls in the Eastern Conference Finals, but only made an average of two field goals per game last season. After suffering so many injuries in the last year, perhaps those injuries have gotten the best of the player many thought would be the fourth option. Curry has played in just 10 NBA games over the last three years, and it’ll be a pleasant surprise if he can become a rotation player.

Miami has other issues aside from Wade’s injury. The Heat could have beaten Golden State and the Clippers with more efficient free throw shooting. LeBron James has frequently left his man to help pick-and-roll coverage, only to leave Dorell Wright, Caron Butler and Danilo Gallinari open for 3-pointers. Miami’s offense suffers when Wade and Bosh go to the bench towards the end of the first and third quarters, leaving James with four bench players. The Heat’s more fast-paced offense has shown deficiencies with increased turnovers and slower defensive rotations. Without signing a quality NBA center this off-season, the Heat's center rotation has left much to be desired.

Yes, the Heat have a long way to go. But I said that after Miami’s first loss of the season. Moreover, the problems Erik Spoelstra faces now are smaller than the ones he faced when the Heat started the season 9-8 and lost five straight games in March. In fact, during the Heat’s January road trip last year, the Heat dropped three straight games, including losses to the Clippers and Nuggets.

Eight of the Heat’s next nine games are at home. Although Miami will play some good teams like the Spurs, Lakers and Bulls in that stretch, the Heat also play Milwaukee, Detroit and New Orleans this month. The Heat now have to jump over the first hurdle the season has thrown their way. Who thought the Heat would never lose three straight games this season? With some time to work on the issues on time for Wade to get healthy, the Heat should have little trouble getting back on track.