With Dwyane Wade out and LeBron James suffering from a cold the night the Miami Heat returned home to face a quality opponent in the San Antonio Spurs, the Heat faced a challenge to snap their three-game losing streak. But James shook off a cold first half -- pardon the pun -- and Chris Bosh and Mike Miller made up for Wade's absence to give Miami a 120-98 win to improve to 9-4 on the season. 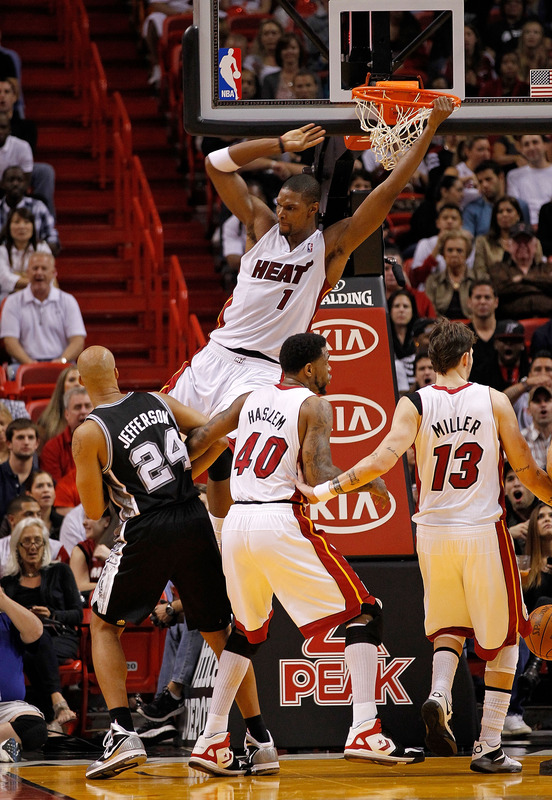 The Positives: The Heat utterly dominated the Spurs on both ends of the court in the second half to turn a 17-point deficit into a game that seemed to emasculate San Antonio, still winless on the road. LeBron James started the third quarter with mid-range shots to cut into the lead, but then moved to the 3-point line and displayed brilliance from there he hasn’t shown since Game 5 of the Heat’s series against Boston last year.

Miller started his season excellently, making all six of his 3-point attempts. But he also made other plays, taking a charge and soaring for two offensive boards that got Miami second-chance opportunities both times. Bosh prevented the Heat from facing a 20-point halftime deficit with 12 second-quarter points, finishing with 30 points and eight boards. He even played the role of the point guard successfully for the first time this season, taking the ball up-court and making a spin move for a thunderous dunk. Mario Chalmers added four 3s of his own to finish with 13 points.

The Negatives: Miami played a step slow in the first half, allowing the Spurs to score 63 points by halftime (they finished with 98). When the Spurs didn’t benefit from the penetration of Tony Parker or 3-point shooting from Danny Green, DaJuan Blair secured offensive rebounds. But the Heat picked the right half to lock down defensively and load up from 3, so I won’t harp on it too much.

Bottom Line: Although the Spurs have struggled on the road, this game probably stands as the Heat’s second-most impressive win this year, next to the win over the Hawks without James and Wade. Miami finally put one in the left column, and they now have a day off to prepare for the Los Angeles Lakers Thursday at 8 p.m. on TNT.