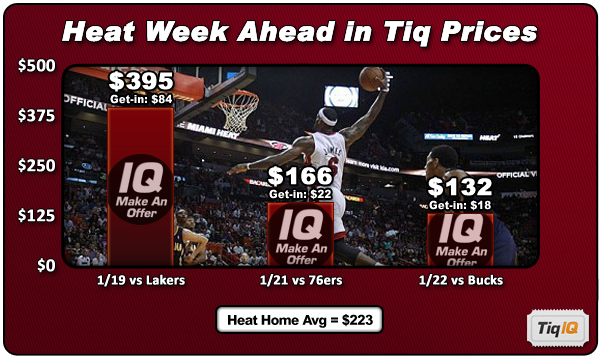 Heat home game tickets for upcoming matches at the AmericanAirlines Arena, including tomorrow's game vs the Los Angeles Lakers, are still available over at Hot Hot Tickets: http://tiqiq.us/6tD

As you can see in the graphic above, the Heat average home game ticket price is $223 with the "marquee match up" tomorrow, January 19th, Heat vs. Lakers now going for an average of $395 but using the "Get In" promotion can get you a seat for just $84. Even better bargains can be had later this week with the January 21 game vs the Philadelphia 76ers, where you can "Get In" for only $22 and January 22 vs Bucks, for $18.

Wade will be on site the entire time to direct camp activities and provide instruction. He will be joined by several of the top prep and collegiate coaches from the Fort Lauderdale and Miami area. The camp is open to boys and girls ages 7 to 18. Session 1 for ages 7-11 and session 2 for ages 12-18.

The camp will feature various instructional stations specializing in fundamental skills and the team concept of basketball. Groups will be small to ensure that each camper gets personalized instruction. Each camper will receive an autographed camp team photo with Wade, a camp T-shirt, camp goodie bag and the opportunity to win additional prizes. Cost of the camp is $249.

Campers are encouraged to register early, as spots are limited and last year's camp sold out.

Additional information and registration is available by visiting www.WadeCamp.com or by calling 888-389-CAMP (2267). Also, check out the Dwayne Wade All-Star Cheer Camp powered by Camp Katina that runs concurrently with Dwayne’s Basketball Camp! Details can be found at www.WadeCheerCamp.com.

Former Cleveland Cavs and Miami Heat center Zydrunas Ilgauskas has been hired by the Cavs to join their front office as the Special Assistant to the General Manager.

The announcement was made today by Cavs General Manager Chris Grant. In his role as Special Assistant to the General Manager, Ilgauskas will be involved with front office responsibilities, including evaluation of amateur and professional prospects.

"We are very pleased to have Z begin the next phase of his basketball career with the Cavaliers and I am looking forward to working closely with him. Z has always had a great desire to learn and succeed and he already has a deep understanding and appreciation of the game and the NBA. We are extremely happy to welcome him back as part of our franchise," said Grant.

"I am really excited to come back to the Cavaliers, a team that I have so much history with and contributing to our future success," said Ilgauskas. "I’m also looking forward to learning more about this game that I love so much and working with Chris Grant and the rest of the organization in every way that I can."

After 12 years in Cleveland, Ilgauskas signed with the Miami Heat with the goal of winning a championship with former Cavs teammate LeBron James. After going back and forth about returning this season, Ilgauskas picked up his player option after the NBA Finals for the second year of his contract but ultimately decided to retire in late September.