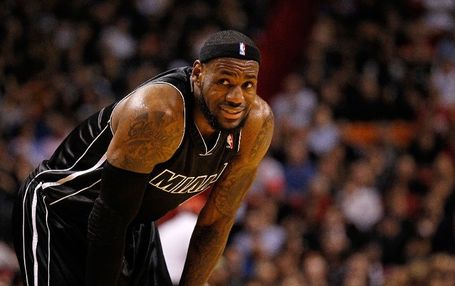 Heading into Thursday nights game between the Miami Heat and Los Angeles Lakers, the majority of the attention was being played to the matchup between LeBron James and Kobe Bryant, the top two scorers in the NBA this season. This was one of those games where you can look at the key matchup and it tells the story of the game.

Kobe struggled from the field, shooting a very low percentage and unable to get any flow going until the final minutes of the game, which you could also say about his Lakers. Meanwhile, LeBron James was dominant, scoring throughout the game despite suffering from the flu, leading his Heat to an impressive start-to-finish 98-87 victory.

Miami has now won back-to-back games against teams who are in 1st place in their respective Western Conference divisions, both without Dwyane Wade in the lineup. LeBron led all scorers with 31 points and had a much better all-around game then Kobe Bryant, who put up a late-game scoring charge to pump his game total up to 24. Bryant didn't even lead his team in scoring thanks to Pau Gasol's season-high 26-point outburst.

Tonight also marked the beginning of Eddy Curry's in-game work, as he finally cracked an NBA lineup for the first time since December of 2009. Coach Erik Spoelstra kept Curry's minutes limited, keeping him in the game for only 6, but the big man made the most of his limited time. Curry scored 6 points on 2-of-3 shooting, adding 3 rebounds and a pair of free throws in his debut. He showed the offensive skills that he is known for, and it seems that the upside with Curry could be very beneficial for the Heat.

The Heat will now have a day off before facing back-to-back home games this weekend. Saturday will be another tough test against the surprising 1st place Philadelphia 76ers, then Sunday is a possible trap game against the Milwaukee Bucks.