Playing a quality opponent for the second straight time without Dwyane Wade, LeBron James and the rest of the Miami Heat rose to the challenge. Miami cruised to a 98-87 win over the Los Angeles Lakers in a game that makes the Heat’s recent three-game losing streak seem like distant history, improving to 10-4 on the season. 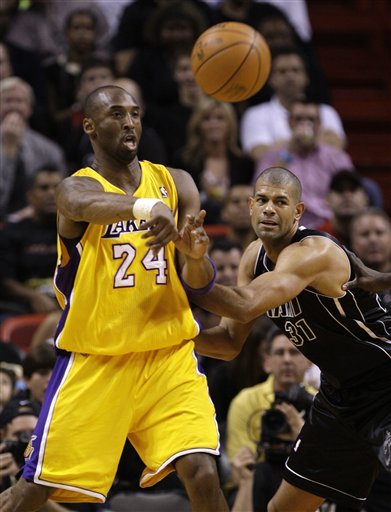 The Positives: James played well despite suffering from flu-like symptoms Thursday night. He finished with an efficient 31 points on 12-of-27 shooting from the field, eight rebounds, eight assists and four steals. The two-time MVP also had one of his signature chase-down blocks on Matt Barnes and later humiliated the 7-foot Andrew Bynum, rejecting a dunk attempt.

Although many billed this game as a LeBron vs. Kobe duel, the two seldom guarded each other. Shane Battier defended Bryant remarkably well, challenging him into tough shots. Bryant caught fire in a futile attempt to bring the Lakers all the way back from a 23-point deficit, but still shot just 8-of-21 from the field. Battier also made three 3s on offense. Chris Bosh had 15 points and eight boards, Mario Chalmers finished with 10 points and six assists and Udonis Haslem had eight points and eight boards. Mike Miller was much quieter in his second game of the season, but did play actively and make a 3-pointer.

Eddy Curry played in his first NBA game since December 2009 and showed that he could score in the post. He made a nice layup in the first quarter, scored a tip-in dunk and earned a trip to the foul line. With Dexter Pittman ill for now, it will be interesting to see if Curry can become Joel Anthony’s backup.

The Negatives: Curry was slow on defense, leaving power forwards open when Bosh or Haslem had to play pick-and-roll defense. Troy Murphy was 4-for-4 tonight thanks to pick-and-pops. In contrast, Anthony is quick enough to cover the open man. Bynum recorded 15 points and 12 rebounds, and Pau Gasol had 26 points and eight boards. The Heat did mostly defend Bynum with Anthony and Bosh, so perhaps Miami should feel good that the center didn’t score more points.

As alluded to earlier, the Lakers did get the lead down to 10, but the Heat never let it dip into single-digits. Bryant sometimes just makes those low-efficiency 3s.

The Bottom Line: The Heat looked surer of themselves Thursday night than they did when they blew leads to the Golden State Warriors and Los Angeles Clippers. This team now has some momentum, and will host the Philadelphia 76ers Saturday night at 7:30.