Hawks Humble Heat 100-92, First Loss Of The Season For Miami

Share All sharing options for: Hawks Humble Heat 100-92, First Loss Of The Season For Miami

A day after establishing the best start in franchise history, the Miami Heat suffered their first loss of the season, dropping a 100-92 decision to the Atlanta Hawks at home in a game that reveals this team still has a long way to go. 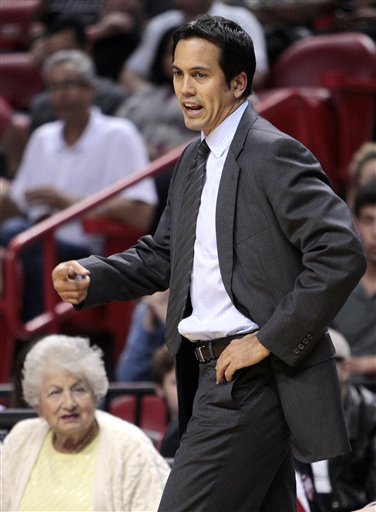 The Heat employed their athleticism to get fast break points for many of Miami’s first games, but let the Hawks dictate the tempo for nearly all of Monday. The Heat started the game well, racing out to a 20-10 lead on a Dwyane Wade to LeBron James alley-oop. But the Hawks then went to a zone, stifling Miami’s offense and getting back in the game. Still, the Heat had a four-point lead going into the fourth quarter.

Miami quickly surrendered the lead, allowing Tracy McGrady to deliver some play reminiscent of his peak years. The Heat stood within four with more than three minutes left to go, but Atlanta staunchly protected the lead. Coming out of a time-out, Josh Smith connected on an alley-oop dunk. On Miami’s ensuing possession, Smith swatted a James layup attempt. McGracy made a 3-pointer on the other end of the court to hit the dagger.

Wade seemed to find a crack in the zone defense at the end of the second quarter, driving to the rim on consecutive possessions with the help of picks from Shane Battier. But in the third quarter, the Marquette product settled from jumpers. He finished with 12 points on just 4-of-17 shooting from the field and 4-of-6 shooting from the foul line. As a team, Miami missed nine free throws, possibly the result of tired legs. On the bright side, Wade did dish out 10 assists.

The other two stars wearing Heat jerseys played better than Wade, but still left some to be desired. James finished with 28 points on 11-of-18 shooting from the field, seven rebounds and six assists. But James almost never went to the post game Monday. He should have called for the ball there when Atlanta played in the zone defense and in the fourth quarter, with Wade struggling and the Heat looking disjointed on the court. Spoelstra had James spend time at the four for some extended playing time, but James still did not call for the ball in the post.

Chris Bosh added 18 points on 8-of-18 shooting from the field and six rebounds. He attempted three errant 3-pointers, and so far defenses have gladly allowed Bosh to take the long-range shot. 2011 3-Point Shootout champion James Jones did not even take a shot in more than eight minutes on the court. The Heat failed to move the ball over the court and find Jones when the Hawks went to the zone.

On the positive side, Battier finally recovered from his early shooting slump, making a four-point play in the first half and finishing with 11 points in 24 minutes. Battier spent time guarding Joe Johnson, but neither he nor Wade could slow down the All-Star guard, who finished with 21 points. Udonis Haslem had 10 boards off the bench, and Norris Cole scored 10 points in just 18 minutes. Erik Spoelstra used Mario Chalmers in the fourth quarter, but Cole deserved those minutes. Chalmers committed five turnovers.

The Heat have tomorrow off, but will try to bounce back with a home game against the 4-1 Indiana Pacers at 7:30 p.m. Wednesday.

Heat center Mickell Gladness was not with the team for Monday’s game with a foot infection. He is listed as day-to-day