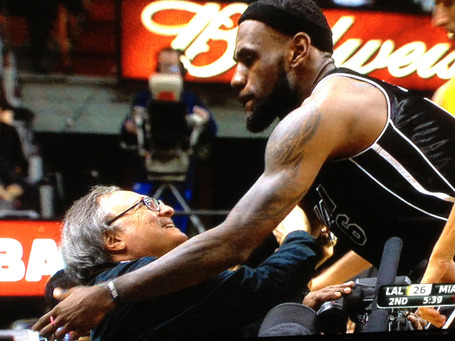 The most memorable moment in Thursday night's game between the Miami Heat and Los Angeles Lakers perhaps wasn't any part of the actual game. Late in the first half LeBron James went after a loose ball that had deflected off of the Lakers' Jason Kapono. He crashed right into a fan sitting courtside, knocking him back in his chair. That fan was none other then Miami Marlins owner Jeffrey Loria.

LeBron almost knocked Loria over, but as he fell backwards in this chair LeBron reached out and held the head Marlin off the ground and set him back upright in his seat. Loria would escape the collision unharmed, instead sitting with a large smile on his face for the next few minutes, laughing and talking about his brush with King James. Marlins President David Samson was sitting a couple seats away from Loria and seemed to get a kick out of it as well.

Loria may have been one of the most talked about owners in Baseball this winter, bringing in players like Jose Reyes, Heath Bell, Carlos Zambrano and new manager Ozzie Guillen, but apparently his face is unrecognizable in the world of the NBA.

TNT announcers Marv Albert and Steve Kerr didn't realize it was Loria when the crash landing actually happened. Neither did LeBron James. It wasn't until halftime when LeBron was doing an interview with Craig Sager that he was made aware of who he had just run over. James instantly thought of our hometown baseball team and even compared Sager's wardrobe to the Marlins' new colors.

"Oh yeah, Miami Marlins. I got to get one of those new hats they're wearing. Oh, by the way, you've got on the colors, too. We've got to get you a hat, too."

I'm guessing that Loria will have a hat sent to LeBron fairly quickly. In case you didn't see it, I'm posting the video of the crash landing and then the halftime interview below. Also, feel free to come up with funny captions to the photo above.