Miller, Curry Show Promise, But One Has Staying Power

Share All sharing options for: Miller, Curry Show Promise, But One Has Staying Power

Until this week, Mike Miller and Eddy Curry wore suits at the end of the Miami bench. They arrived here under vastly different circumstances, but are now essentially in the same place. Pat Riley offered Miller a contract that makes him the fourth-highest paid player on the team and tendered a non-guaranteed deal to Curry. But they both face the possibility of finding themselves off of the Heat roster if they do not show some productivity this season. In their limited action, they have given Riley reason to hope. As strange as it may seem, though, Curry may have a better chance of staying with the team than Miller does. Let me explain.

Dwyane Wade’s sprained ankle helped Miller receive playing time, and he made six 3s while offering his usual energetic play against the Spurs Tuesday night. Although he only made one long-distance shot against the Lakers – he only had two attempts from downtown – Miller continued his hustle play. But the Heat paid Miller $30 million over five seasons to become the fourth scoring option, not just to hustle. In his tenure with Miami, Miller has yet to score double-digit points in consecutive games. 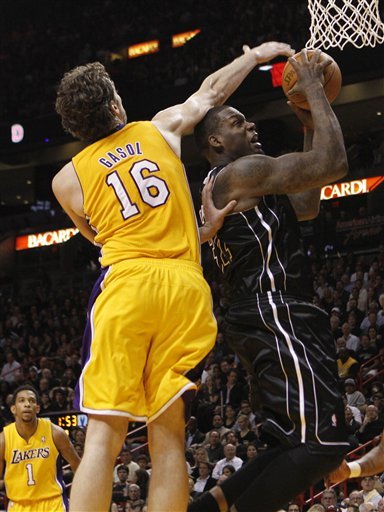 Fellow Hot Hot Hoops writer Rob Smith recently expounded on the implications of the more punitive luxury tax system that will take effect during the 2013-14 season in a recent post. That year, the Big Three will make $56.67 million. Udonis Haslem, Shane Battier and Joel Anthony bring that number up to $68.08 million. The luxury tax threshold stands at $70 million this year, and the Heat would nearly reach it among six players. Smith said that Miller has about as good of a chance of staying on the Heat roster then as he does, and he’s right. If he can score 12-15 points off the bench consistently – a big question mark – Riley could have a tougher time deciding whether to use the amnesty clause on him, but Miller’s best realistic hope now is for Riley to opt against amnestying him before the 2012-13 season.

The Heat have always taken a long-term view with Curry. He made the 15-man roster after suffering an injury in training camp, proving that Riley didn’t want to discard him at the first sign of trouble. He played for the last few minutes of the first quarter and the opening minutes of the fourth quarter against the Lakers, earning an "Eddy!" chant in his productive stint. He can still score in the post, and having that option helps the Heat. He has instantly become the best offensive center the Heat have had over the last two years. As I mentioned earlier, Riley’s large financial commitment to the Big Three has left him to take low-cost risks elsewhere on the roster, like signing Curry or having the 28th pick in the 2011 NBA Draft instantly become a rotation player. The Heat have options at Miller’s position in Shane Battier and James Jones. On the other hand, Dexter Pittman and Mickell Gladness are still unproven.

Even against the Lakers, Miami played Bosh and Haslem together, and we’ll see more of that in the future simply because they are better than any of the Heat’s centers. With Joel Anthony starting, Curry won’t be expected to play a lot. All he has to do is offer some offensive production in the post. If he continues to score effectively around the hoop – his polished, NBA-quality skill – he may re-sign with the Heat next year.

NBA owners have always handed out bad contracts to players after they have one good year (remember Tyson Chandler?), and Curry could conceivably demand more than the veteran’s minimum if he plays well this year. But Curry has voiced his appreciation for the opportunity this organization has given him. The Heat quite literally picked Curry off the street.

Both Curry and Miller played well in their first minutes of action this season. But the harsher luxury tax makes Miller’s contract an albatross. Teams can only use the amnesty clause once, and Miller makes more money than anyone on the roster outside of the Big Three. Curry has a long way to go before anyone can consider him a Heat mainstay. But simply because he isn’t expected to do as much as Miller and because he doesn’t have four years left on his contract, he has a better chance of staying here long-term than Miller does.

If you need more convincing, remember that Jamaal Magloire stayed with Miami for three years.