LeBron James and Chris Bosh more than held their own against the former playoff foe Philadelphia 76ers to compensate for an ailing Dwyane Wade, dominating the second half to give Miami a 113-92 win to improve to 11-4 on the season and tie the Orlando Magic for the second seed in the Eastern Conference. 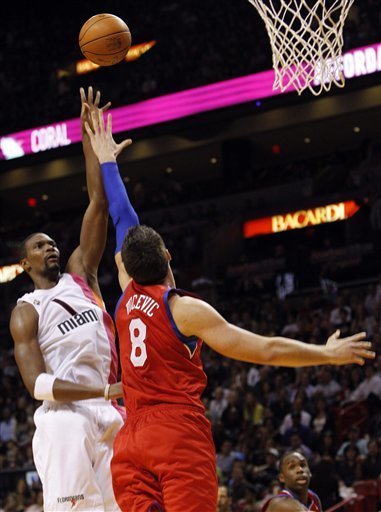 The Positives: The Sixers proved in the competitive five-game series against the Heat last season that they keep making runs no matter what the scoreboard says. Miami answered every Sixers burst, the last one coming in the fourth quarter when James went to his post game, seemingly toying with whoever guarded him. The two-time MVP shot 12-of-17 from the floor to finish with 28 points to go along with nine rebounds, five steals and three blocks.

Bosh paced the Heat with 30 points on 11-of-19 shooting and a perfect 7-for-7 from the foul line. The former Toronto Raptor mixed up his offensive game, making a nice hook shot after a drop step in the second quarter, nailing a 3 early in the game and even using his patented pump-fake to get a few trips to the line. Joel Anthony rekindled memories of his impressive performance against the Sixers in the playoffs with nine rebounds, three blocks and nine points. He even caught a football-style pass from James to lead a fast break and made two free throws after earning a trip to the line.

The Negatives: The Heat’s help-and-recover defense left the Sixers open for some 3-point shots. Lou Williams was the main beneficiary of that slow defense with four triples. After playing great defense on Kobe Bryant, Battier struggled against Evan Turner in the second quarter. Turner finished with 16 points.

The Bottom Line: The Heat have now held their last three opponents under 100 points. They are still sizzling offensively and beginning to become dominant on both ends of the court. The Heat players can’t rest on their laurels, though, because they play the Milwaukee Bucks tomorrow at 6 p.m.