Playing for the second time in fewer than 24 hours, the Miami Heat came out flat against the Milwaukee Bucks, suffering their fifth loss of the season, 91-82. 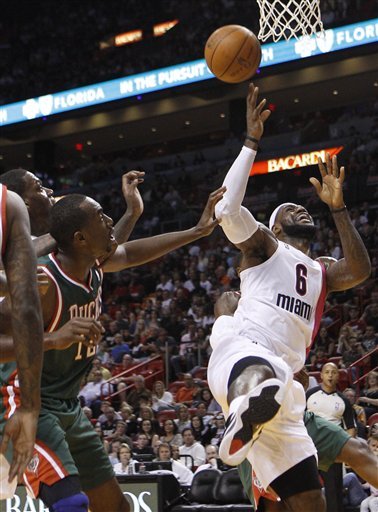 The Positives: LeBron James carried Miami during the first half, scoring 20 points before intermission. He finished with 28 points on 8-of-18 shooting from the field and 12-of-13 shooting from the foul line, 13 rebounds and five rebounds.

Other than that, um, Eddy Curry survived a six-minute stint in the first quarter after Joel Anthony picked up two fouls.

The Negatives: The Heat played sloppily the whole way through, committing 22 turnovers against the Bucks. Chris Bosh and Mario Chalmers were the main culprits; Bosh had a career-high eight cough-ups while Chalmers had six. Miami also shot just 37 percent from the field, rarely appearing in-sync offensively. The Heat had just nine assists as a team, a season low. With Dwyane Wade out, the Heat become more reliable on 3s, and it worked for the past three games. But James Jones, Mario Chalmers and Shane Battier all had off nights, and Mike Miller didn’t even attempt a 3.

With all of the bad play, the Heat still were within 83-80 with two minutes and 15 seconds left. But on Milwaukee’s ensuing possession, the Heat went to a zone defense. Ersan Ilyasova had a wide-open shot as the shot clock expired and bumped the lead up to five. And on the other end of the floor, Mike Miller made an ill-advised pass to Shane Battier that resulted in a turnover.

Although the Heat tied with Milwaukee in the rebounding battle 42-42, the Bucks got some key offensive boards. The Heat seemed a step slow to loose balls the entire night. The referees compounded the tough night, calling three technical fouls in a particularly brutal second quarter.

The Bottom Line: I’m willing to write this loss off as one of those "excusable letdowns in a condensed schedule" games. But Heat are in the midst of a four-game-in-five-nights stretch, and they can’t come out lackadaisically against Cleveland or Detroit in the coming days.