Bosh Leads The Way As Heat Squeak By Cavs 92-85

Share All sharing options for: Bosh Leads The Way As Heat Squeak By Cavs 92-85 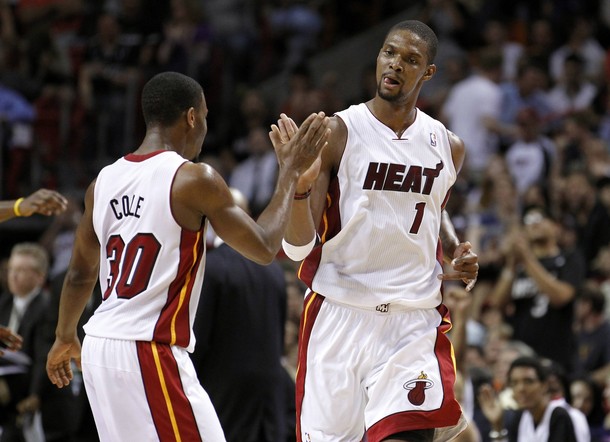 The Miami Heat once again looked lethargic and sloppy against a lesser opponent and the continued absence of Dwyane Wade has noticeably taken its toll on the offense. Mercifully, Chris Bosh was able to come through with yet another scintillating 30+ point performance (his fourth of the season) to overcome LeBron James' worst game of the season. The Heat's sharp free throw shooting helped tremendously, which could have also saved the day during the Heat's weak West coast road trip, because the team needed every single point to hold off the Cleveland Cavaliers 92-85.

"It wasn't an altogether smoothly-played game but there in the end, regardless of how you get there, we were able to get a handful of stops and execute some half-court offense going down the stretch," explained coach Erik Spoelstra. "Finally in the last three or four minutes, the ball started to move and we were able to connect on either some open shots after some ball movement or draw some fouls."

Bosh's 17-point fourth quarter output, the most he's scored in the fourth since leaving the Toronto Raptors and the most from any Heat player this season, put his gifted offense repertoire on full display, with the power forward simply dazzling as he scored from every part of the court. The perimeter shooting was precise, he took his man off the dribble and attacked the basket, he couldn't miss from the free throw line (14-14) and he even threw in a high-arc three-pointer for good measure. He finished with 35 points (10-16 FG shooting) and 7 rebounds.

It was a good thing too because this was yet another night where the Heat, where they once looked unstoppable out of the gates weeks ago, looked very beatable against what should have been an easy foe. But the Cavs showed fight with Samardo Samuels and rookie sensation Kyrie Irving keeping their team close throughout the second half. Cleveland didn't exactly play too precise either and shot themselves in the foot with 22 turnovers, several of which proved costly down the stretch.

The Heat may have improved to 7-1 without Wade but they'll need their superstar back soon, with little else besides Bosh to feel good about on offense. Norris Cole finally broke through with 10 points on an efficient 5-8 shooting but apart from James' 18 points, no other player reached double figures. Shane Battier did little as a starter and Mike Miller, though active on the boards, has shied away from being aggressive with his shot - a bad habit carrying over from last season. Udonis Haslem chipped in 10 rebounds but his shot remains iffy. The Heat's outside shooting was so unreliable that Spoelstra elected to use Cole and Mario Chalmers in the backcourt along with UD and his two superstars while Battier, Miller and James Jones sat on the bench down the stretch. There was little movement off the ball as a team and James tried too hard against his old team and his ballhandling was oddly shaky, leading to several costly turnovers.

"We'll take it and now we have a quick turnaround on this back-to-back," said Spoelstra. "We'll probably get in late tonight and so our mindset is about doing whatever it takes to make sure we have the right energy and focus tomorrow night in Detroit."