For a while there, it looked as though the Miami Heat (13-5) were going to squander a 10-point fourth quarter lead and fall to the lowly Detroit Pistons (4-15) Wednesday night. LeBron James, oft-maligned for his final period performances, wouldn't let that happen. 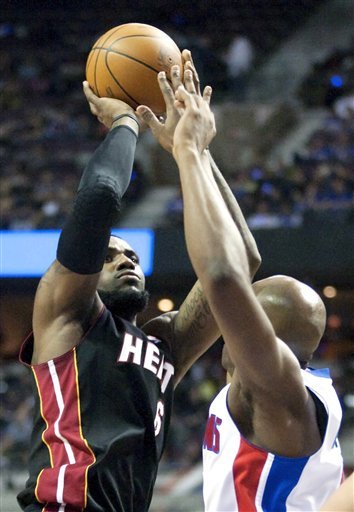 James hit all six of his free throw attempts in the final 1:19 of the game, giving the Heat a come-from-behind 101-98 victory. He finished with another MVP-caliber performance, scoring 10 of his 32 points in the fourth while adding six rebounds and seven assists. Particularly encouraging was the fact that James, who struggled badly from the charity stripe during the Heat's winless west coast trip last week, hit 13 of his 14 free-throw attempts tonight. Head coach Erik Spoelstra said, "I like the fact that he got to the free-throw line and was aggressive down the stretch."

The Heat appeared to be on their way to an easy win when Mike Miller's tip-in off a James miss with seven minutes remaining gave Miami a 90-80 lead. Detroit went on a 12-0 run, though, capped by Brandon Knight's jumper with 3:15 left. Chris Bosh reeled off five straight points on assists from James to give Miami a 95-92 lead before Greg Monroe's three-point play tied it with 2:05 remaining. Jonas Jerebko's three-pointer at the 1:32 mark gave the Pistons a short-lived lead before James closed the game with his own 6-0 run.

Detroit got an unexpected breakout performance from Austin Daye (10-for-18, 29 points, 6 rebounds, 3 assists), who entered the game having scored only 45 points this season. Daye hit 4 of his 8 three-point attempts despite entering the game shooting just 1-for-17 from beyond the arc.

Both Spoelstra and Miller attributed the Heat's road struggles to the taxing travel schedule that accompanies this lockout-condensed season. "Give (Detroit) credit," Spoelstra said, "Every time we got a double-digit lead they came storming right back. These are tough trips when you're getting in at 3:30-4 (a.m.)."

Bosh was extremely efficient, hitting 12 of his 15 shots and finishing with 27 points, six rebounds and three assists. He's shooting 60% (49-for-82) over the Heat's past five games. Spoelstra said, "He's gaining so much confidence, and we're feeling confident in him." Miami received solid play from their point guard duo as Mario Chalmers and Norris Cole combined for 25 points and 8 assists on 9-for-16 shooting.

Udonis Haslem and Shane Battier continued their season-long struggles, both failing to register a point in a combined 46 minutes of play. Eddy Curry was also ineffective, at one point missing an uncontested dunk in front of the basket.

The Heat will be back home Friday night as the struggling New York Knicks come to town. New York (7-11) fell 91-81 to the Cleveland Cavaliers Wednesday night and have lost seven of their last eight games. The Knicks, however, might have the services of point guard Baron Davis, who is expected to make his season debut shortly. The game tips off at 8 p.m. and can be seen on both SunSports and ESPN.