Dwyane Wade returned to the court Friday night after suffering a sprained ankle two weeks ago, helping lead the charge against the rival New York Knicks to secure the sixth Miami Heat win in the past seven games, 99-89. 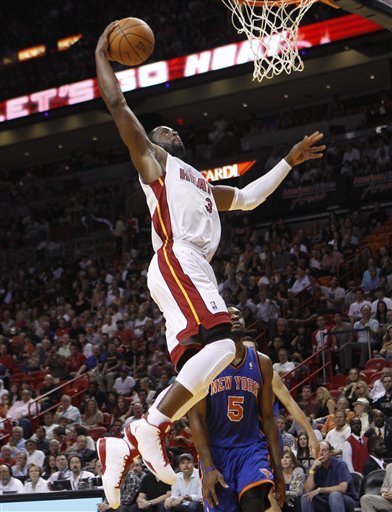 The Positives: LeBron James and Dwyane Wade played utterly phenomenal Friday, delivering an array of highlight-worthy plays. Wade threw a no-look lob to James early in the game before Wade emasculated Landry Fields on a vicious dunk, and James dunked on Bill Walker. In the fourth quarter, James found Wade on an alley-oop pass to extend Miami’s lead to nine.

The two-time MVP finished with 31 points on 11-of-18 shooting, eight rebounds and seven assists. James also made several free throws down the stretch to ice the game. Wade had 28 points on 11-of-19 shooting, five steals and two blocks in just 32 minutes. While James rested midway through the fourth quarter, Wade led a Heat run to give Miami some breathing room in a tightly contested game.

Mike Miller didn’t make any 3s, but was 3-for-3 from the field and looked comfortable coming off screens to shoot 17-footers. He brought his usual rebounding and effort, but Miller needs to take open shots like he did tonight. Other role players stepped up in timely fashion. Shane Battier knocked down two consecutive 3s in the third quarter to keep Miami afloat. Udonis Haslem fought for some rebounds and even made a couple jumpers. Haslem also defended Amar’e Stoudemire well, with he, Joel Anthony and Chris Bosh holding Stoudemire to 5-of-14 on the night. Mario Chalmers launched a long pass to Bosh for a layup in the second quarter. Norris Cole threw a lob to James from behind his head for a dunk.

The Negatives: The Knicks made 18 3-pointers last night while Miami made just two. New York cooled down in the fourth quarter, but some of the 3-point looks throughout the game were open. Bill Walker made seven triples and Toney Douglas made four. The Heat play help-and-recover defense, and sometimes the perimeter players were late on closeouts. Other times, they simply didn’t fight over screens to contest the shots.

After shooting well in Wade’s absence, Bosh had an off night, making just four of his 18 shots. Some of Bosh’s jumpers were way off, and he should try to pump-fake his shot and drive to the basket when that happens. He drove to the basket a few times, but needed to do it more.

The Bottom Line: Wade showed no signs of injury, playing like his usual active self. The Heat clamped down on defense and manufactured some nice open shots in the fourth quarter to get the win. The Heat will face the Eastern Conference-leading Chicago Bulls Sunday at 3:30 on ABC.