Share All sharing options for: Heat Reaction After Victory Over New York Knicks 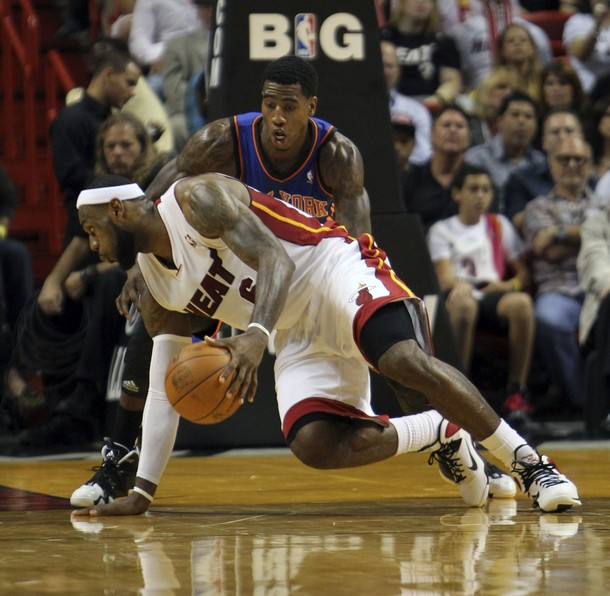 A Heat-Knicks game is always a big event at the AAA, with plenty of New York fans coming out to support their team, no matter how bad they are. (I counted no less than eight Carmelo Anthony jerseys directly in front of me at one point as I walked to the arena). This Knicks team has regressed immensely from last season and with Carmelo out while nursing a variety of injuries, coinciding with the return of Dwyane Wade back from injury after two weeks should have translated into an easy blowout victory. But that wasn't the case at all as the Knicks team started red hot from beyond the arc and went 15-34 through the first three quarters.

"They were moving the ball...extremely well," explained Heat coach Erik Spoelstra afterwards. "Even when we were there they stuck it and were very hot from 3. We just kept on reminding ourselves to stay the course. It was good to see some resiliency and some toughness to stay through that.

"They did a terrific job. That ball was popping, it was moving. They got hot. Even when we were defending and had a hand or a body there they started knocking them down. In the third quarter we had to make the adjustment. Anybody on the scouting report, whatever their shooting percentage was behind the three – we had to throw that out. We treated everybody as Ray Allen. Forget about who they are, that's how they had to be treated with that type of respect. Make them put the ball on the floor and we did it with a better sense of urgency and commitment there in the fourth. We were able to clamp down defensively and get some attack opportunities at the other end."

The Knicks then went 3-9 in the fourth, ending up with an unreal 43 attempts beyond the arc. That broke the record of most attempts by a Heat opponent ever, beating their own mark of 39 in October 28, 2009 and close to the all-time high of 49 in the history of the NBA set by the Dallas Mavericks in 1996. The Knicks were only 12-41 (.292) in two-pointers for the game.

"They got a lot of good looks," said Shane Battier, who knocked down back-to-back three-pointers himself in the third quarter for the Heat's only two makes from that range. "The second half, we were sharper in our defensive execution. And that's why, a lot of times, that extra step is the difference between a make or miss."

"We're going to have to do a better job in defending the three," said Chris Bosh, who struggled with his shot and only scored 13 points on 22% shooting. Bosh had averaged 22.2 ppg on 52% shooting the past 10 games. "We haven't been doing the best job possible this year and that's some room for improvement so we're going to have to get a lot better at that.

Despite ESPN.com's inaccurate claims to the contrary, Wade indeed made his return to the floor two weeks after collecting yet another injury. The Heat's lethargic half-court offense was instantly replaced by the fast-paced high octane offense we all saw back in December. Wade was active on both ends of the floor and the Heat were the beneficiaries with 5 of the first 7 field goals resulting in dunks. The team ended up with 10 dunks, all of them from Wade or LeBron.

"We had a collective franchise decision on this that we were going to make sure that we would get his body right," explained Spoelstra. "All the ailing injuries that he had that we would take that with rest, recovery, treatment and then work on getting him back to condition and working on court work, agility, etc.

"So in normal years, he probably would have tried to play in the Laker game. We held him out another week just to make sure that he felt right and he's been stepping up his conditioning every single day to the point that we all felt confident that he was ready to go tonight."

"He does that every time," said Bosh. "I think he did that the last time he was out, he picked right back up where he left off. He's spoiling us, I'm expecting that every time. He came right in and he got into a rhythm by getting easy buckets, getting some dunks."

Wade led all players with 19 field goal attempts and 5 steals. He even threw in a couple of blocks for good measure.

"I just tried to be aggressive," he explained in the locker room after the Heat's fourteenth victory of the season and eighth at home. "I've been out for a while and the best way to get your rhythm is to attack the basket so after that first block on Amar'e, I decided to attack a little stronger after that. The biggest thing I wanted to do was bring some energy. This team has been playing well but I saw in the Detroit game that we won that game because of our talent and because of our plays in the end. But there wasn't a lot of energy in that game so I wanted to come and bring something a little different.

"I felt good enough and I worked really hard to get back. It wasn't just because it was the Knicks, it was two weeks from when I got hurt so that's what I was targeting. I could have returned (earlier) but I wouldn't have been as effective as I was tonight. It took everything out of me. First of all, (I couldn't) play in the San Antonio game and that was the first time in the NBA they scheduled a game on my birthday and I wanted to play. After that, the Lakers come in and I love that matchup and obviously against one of the greatest players of all time in Kobe. But I had to be smart and I had to think about longevity and what's best for this team. We got good players here so I was able to do that."

LeBron was the only starter with a positive +/- mark of +4. Bosh, Wade and Chalmers all ended up with -1 and Joel Anthony was a -11. This statistic may not be the most accurate to measure a player's effectiveness but Udonis Haslem, Norris Cole, Mike Miller and Shane Battier (the only players to come off the bench) all pulled in + net points in double digits and logged heavy minutes when the Heat pulled away in the second half.

While Knicks fans were unusually quiet this time around, Heat fans were on their feet and applauding their team's effort, notably in one sequence during the second half where Battier and Miller both dived to the floor to retrieve a loose ball that resulted in another Knicks turnover. Wade's hustle on defense also contributed to several fast-break opportunities for easy baskets that were missing in his absence.

"Normally, that's when our defense kicks into gear," remarked Spoelstra. "Unfortunately, they started knocking done some threes and even while we were playing well offensively they were able to keep us at bay and get us back in our heels a little bit with that three-point shooting. Certainly our guys love playing here in this building in front of the fans and they're very ignitable, their personalities, so once somebody makes an effort play then the next guy is trying to make another one. Those are good qualities that we have on this team."