Share All sharing options for: Heat Look Forward to Matchup Against Bulls 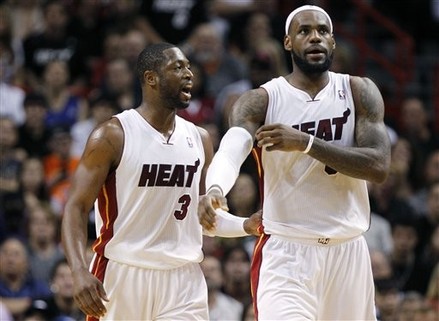 The Chicago Bulls may have won all three regular season matchups with the Miami Heat last season but we all know what happened in the Eastern Conference Finals when it was obvious that Derrick Rose couldn't withstand the production of LeBron James, Dwyane Wade and Chris Bosh by himself. With precious little support from his teammates like Carlos Boozer after their first victory of the series at home, the Bulls wilted as the Heat surged behind timely contributions from Udonis Haslem and Mike Miller.

The Bulls, with their main rotation nearly intact from last season, will undoubtedly be looking for some measure of revenge. The Heat meanwhile seem conflicted in whether this is "just another game" or a "statement game" against a rival team ahead of them in the standings. Yet, there are many games to go in the regular season and the Heat proved last year that homecourt advantage doesn't guarantee much, for better or for worse.

"It's two of the best teams in the Eastern Conference and it's always going to be a great battle...so we got to get the first one on our home floor," said Wade after Friday's victory over the New York Knicks. "It's going to be a great early start to this game and get everyone an opportunity to come out, fill the arena and get our crowd there. Hopefully they can give us that extra edge we need. That's a very good team, very good defensive team. Obviously, it's the team we beat in the Eastern Conference Finals so it's going to have a lot to it but we're up for the challenge and we look forward to it."

Bosh characteristically downplayed the game but said so with a half-smile that led me to believe that may not be entirely the case. He may have shot poorly against the Knicks on Friday but his shooting display in Chicago last season where he went 1-18 was the lowlight of his first season with the Heat. According to the Elias Sports Bureau, it had been 38 years since a player had shot that poorly with 18 or more attempts.

"It's a game on Sunday," he deadpanned when asked how important the game would be. "I like to treat everything as a regular game. I try to have the same approach, the same intensity as the opponent changes. That's really it.

"It'll be a lot of fun. Sunday games are always fun especially playing in the matinee-type setting. It'll be very intense. The Bulls are playing very well right now and we're going to have to play an excellent game."

Spoelstra also went with the "it's just another game" tactic, yet acknowledged it was a game where extra preparation would need to be made.

"Ultimately it's one game," he said. "Neither team will make more of it than it is but both teams are looking forward to it. There's no question about it.

"The Bulls right now are the top team in the East and they're playing extremely well and they had to deal with some injuries like us and yet they've been able to stay consistent and win games. (We know) it will be a very tough, physical game where both teams will mirror each other in terms of physicality and defensive commitment."