Heat Wake Up, Breeze By Hornets

Share All sharing options for: Heat Wake Up, Breeze By Hornets

﻿The New Orleans Hornets took advantage of a complacent and lethargic Miami Heat to open their game Monday night, making nine of their first 10 field goal attempts and racing out to a 12-point lead midway through the second quarter. But from that point on, the Heat played with more urgency and the game went how one would expect a meeting between Miami and an Eric Gordon-less Hornets team would fare. Miami built a 27-point lead, winning 109-95 to improve to 16-5 on the season. 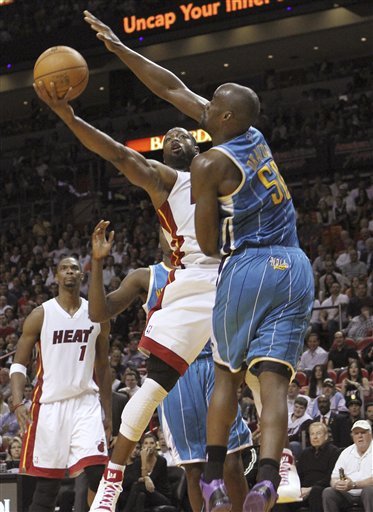 Wade led a Heat spurt to capture a 51-49 lead going into halftime, getting to the free-throw line and making shots at the rim. Miami came out of the gates and dominated the third quarter, with LeBron James taking control on fast-break dunks. Mario Chalmers also made three 3-pointers in the third, extending the lead. James and Wade both sat out the entire fourth quarter, and Eddy Curry played four minutes at the end of the game.

The Heat’s two franchise players finished with 22 points apiece. Wade shot 8-of-15 from the field and 6-of-6 from the foul line to go along with five assists and no turnovers all in 24 minutes of action. James was 8-of-12 from the field, even knocking down a 3-pointer, and nearly registered a triple-double in three quarters of work. In addition to his 22 points, the two-time MVP had 11 rebounds and eight assists.

Although Wade put his offensive struggles from Sunday’s game against the Bulls behind him, the most encouraging sign from this game was Mike Miller’s performance. He had 14 points on 6-of-8 shooting from the field – including nailing two 3-pointers – in 18 minutes. This season has marked a radical shift in Miller’s game simply in the fact that he doesn’t pass up open shots anymore. When Miller was on the court with only one star – either James or Bosh – Miller was actively looking for his shot, coming off screens and making plays.

The Heat received good production from their point guard play, with Chalmers finishing with 11 points and Norris Cole registering 12 off the bench. Chris Bosh added 12 points, Udonis Haslem grabbed five rebounds in 20 minutes, and Joel Anthony had a good game with eight points and six rebounds. On two possessions, Anthony secured the offensive rebound and scored. Last season, Anthony would have thrown those balls back to the point guard. But the Heat’s starting center has clearly shown improvement in his offensive game this season.

Curry scored four points in garbage time, although one of his field goals came because of a goaltending violation. He made a nice layup, and the Heat players tried to feed him the ball in the post at the end of the game. He committed three fouls in four minutes though, on one possession simply standing in the lane with his arms raised as DaJuan Summers crashed into him. Curry has to try to block the shot or take a charge; it always annoyed me when Shaquille O’Neal would do the same thing in Miami, fouling a guy hard instead of trying to make a positive play.

Now with Miami’s home stretch behind them, the Heat will visit the Milwaukee Bucks Wednesday at 8 p.m.