With Dwyane Wade sitting out Wednesday’s game against the Indiana Pacers with a bruised left foot, the Miami Heat rose to the challenge, blowing out the then-4-1 Pacers 118-83 to improve to 6-1 on the season. 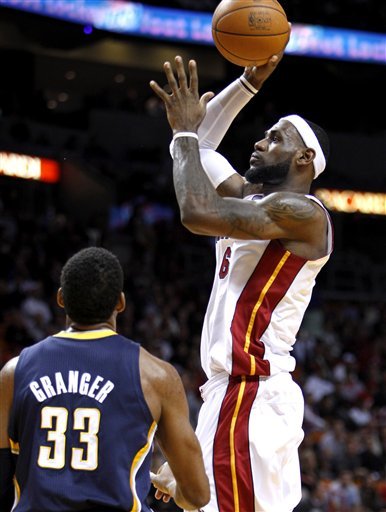 The Positives: LeBron James dominated against anyone who stood in his way. He went to his improved post-game repeatedly, getting deep position for easy shots. The two-time MVP finished with 33 points on 12-of-21 shooting from the field and 9-of-11 shooting from the foul line, 13 assists and eight rebounds.

The Heat players collectively compensated for the absence of Wade, though. Chris Bosh continued his strong play with 22 points on 7-of-11 shooting from the field. James Jones took on the role of Mariano Rivera, starting for Wade and making four first-half three-pointers. Mario Chalmers and Norris Cole combined for 24 points, and Udonis Haslem had eight points and 10 rebounds. Dexter Pittman played as the backup center against 7-foot-2 Roy Hibbert and looked good in his playing time. He defended Hibbert well on one third-quarter possession and later made an alley-oop in garbage time.

Some may have expressed concern over Indiana’s big front line with Hibbert, David West and Danny Granger, but Miami won the rebounding battle 42-36. The Heat also forced 23 Indiana turnovers while committing only 13 mishaps.

The Negatives: Every time the Heat did something wrong, they seemed to more than make up for it later in the game. The Pacers shot well to open the game, but had one field goal in the second quarter and shot 35 percent for the game. Cole made the mistake of passing the ball to James in a fast-break situation when he should have just drove it in himself, but he subsequently stole the ball and made a layup despite getting fouled.

The Bottom Line: So far, the Heat stand as the best team in the NBA. The Pacers didn’t go to the zone nearly as much as the Hawks or Celtics did, but Miami was well prepared to attack it. James seemed to roll his ankle on a drive late in the third quarter, but played through it. It will be interesting to see the injury updates of Wade and James before the Heat’s rematch with the Hawks tomorrow at 8 p.m. on TNT.