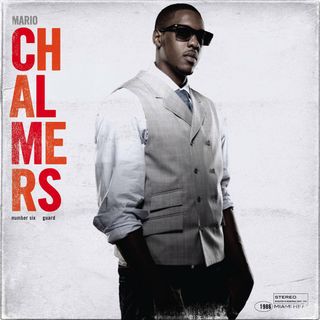 If you’re anything like me, you have a love-hate relationship with Almario "Mario" Vernard Chalmers. One minute he is draining a three from the wing, the next he’s dribbling the ball off his knee out of bounds, and getting an ear full from LeBron James. On Twitter his hot and cold play has become known as "Good Chalmers, Bad Chalmers", and it’s entirely possible to see both sides on a single given possession. While there is a new hot shot rookie point guard in town named Norris Cole, believe it or not Heat fans once felt the same way about Chalmers. Mario left the University of Kansas on a high, hitting one of the biggest shots in NCAA Championship game history. He would follow that up by starting all 82 games in his first season with the Heat, leading all rookies in steals - and all in all seeming to have a bright future with the Heat. While he hasn't been exactly terrible, he has frustrated at times, due to his up and down play. It seems you just never know what you are going to get from Chalmers, making him a hard player to gauge. So I set out on the hunt to find out exactly where Mario Chalmers stacks up against the competition. Is he under appreciated? Is the criticism too harsh? Let’s see.

First I wanted to take a look at the guards taken in the first round the same year (2008). Mario was taken 34th overall (4th pick of 2nd round). Excluding the lottery picks Derrick Rose, Russell Westbrook, and Eric Gordon, Mario holds his own. At the time of this draft, Pat Riley was rumored to be enamored enough with O.J. Mayo to consider taking him ahead of Michael Beasley. When considering Mayo averages nearly six more minutes a game than Chalmers, it’s pretty surprising to see there isn’t much difference in the player on paper. While Mayo came into the league with considerably much more hype than Chalmers, he has proven to be just an adequate scorer, nothing on the level of what was expected when he was taken with the third overall pick (just ahead of Kevin Love and Russell Westbrook!). Taking into consideration that Chalmers is the better defender of the two, it’s safe to say Riley dodged a bullet when it comes to selecting Mayo with the #2 pick. The rest of the guards on this list don’t exactly jump out at you, making Chalmers value seem even better.

(above stats via ESPN.com)

While it is tough to compare two players on two different teams with two different supporting casts in two different systems – for discussion purposes I will consider things equal. While Chalmers may play on a team with more assist opportunities, a player like Jordan Farmar may play on a team with more scoring opportunities. Speaking of Jordan Farmar, after a little research, he is the player I would most closely compare Mario Chalmers to. In his career he averages 7.4pts, 2.7 assts, and 1.9reb per game – similar all around to Chalmers. Possibly not so much of a coincidence, Chalmers recently signed an identical deal to Farmar's 2010 deal with the New Jersey Nets (3 years at $12 million). That seems like the going rate these days for a serviceable veteran backup point guard. The problem is, Chalmers is currently the starter in Miami, with only a green horn rookie in Cole pushing him for playing time. While Chalmers may match up favorably to most guards taken ahead of him in the 2008 Draft, stat wise he doesn't exactly compare all too well to NBA point guards overall.

While perception is Chalmers is a "turnover machine", I found that to be actually quite untrue. Chalmers turns the ball over at a 1.7 per/game clip, nearly identical to the career average of Jason Kidd (1.8) – while the Bulls Derrick Rose owns a career 2.9 turnover per game rate. Many things factor into a turnover rate, most obviously how much a player is asked to handle the ball, and for that matter "make things happen". Regardless, I thought it was interesting to find that Chalmers career turnover rate was actually pretty favorable, to most point guards. Again, Chalmers is more of a "to mid-court care taker" of the ball these days, but that wasn't the case his entire career. Overall it seems the numbers prove Mario’s reputation of being careless with the basketball, aren't exactly true, quite the opposite really. However, something that doesn't show up in any box score is the number of times Chalmers seems to put his teammate in a tough spot - in my opinion way too often. While it may not be a turnover by Chalmers, it's normally a negative play all the same.

Overall it seems that Mario Chalmers has provided the Miami Heat with good value since he has entered the league, but obviously, nothing to write home about. While it seems the Heat made a good move acquiring Chalmers' rights from the Timberwolves in the 2008 Draft, he has been just that – good. Veteran point guards have come and gone the past few seasons, and Chalmers has outlasted all of them. This season his main competition is young, fast, and exciting, a form of competition he has yet to face since coming into the league. This season Chalmers seems to have done the best thing he could have done to keep his job, improve his three point shooting (12-19, 63%). The Miami Heat are a unique team, in that they don’t have the need for a tradition point guard. The times when said point guard is on the floor, he must be able to hit the open shot – something Chalmers has done early on in the 2012 season. While Chalmers continues to improve his game, the fans will just have to accept the good and the bad.