Share All sharing options for: James Leads Heat to Easy Win Over Nets 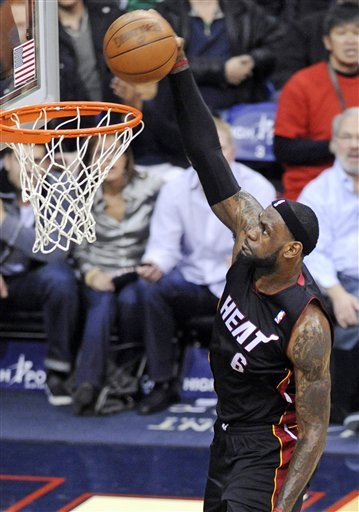 The Miami Heat aren't quite full strength yet, but they're getting closer.

LeBron James returned from a one-game absence to lead the Heat to a 101-90 victory over New Jersey, giving the Heat their first 8-1 start in franchise history.

James put any doubts about both his health and the game's outcome to rest early, scoring 22 of his 32 points in the first quarter. He added seven rebounds and nine assists in his 37 minutes. The Heat led 31-18 after one and the Nets never seriously threatened at any point thereafter.

Chris Bosh (6-for-14, 16 points, 5 rebounds) was much less assertive than he was in Thursday's triple overtime win at Atlanta, but the Nets' punchless offense and James' early brilliance rendered the dropoff irrelevant. Udonis Haslem posted another double-double from his previous performance in Atlanta, contributing 12 points and 12 rebounds off the bench.

Nets' superstar Deron Williams (10 points, 10 assists) struggled, shooting just 4-for-16 from the field while committing 5 turnovers. Kris Humphries was the lone bright spot for New Jersey, contributing 25 points and 12 rebounds. The Nets shot just 10-for-33 from 3-point territory and just 34% (28-for-83) from the field.

The Heat will have two days to rest before heading out west to play three games in four nights, starting with Tuesday night's game at Golden State. A much-anticipated matchup with the revamped Clippers awaits Miami Wednesday night, and the Heat will finish out the 5-game road trip Friday night in Denver.

Dwyane Wade missed his third consecutive game with a sore left foot. Wade told The Associated Press' Tim Reynolds, "As much as I want to be out there, my team needs me to be Dwyane Wade and not somebody else on the floor." Before the game head coach Erik Spoelstra told the media that Wade, having had a few days of rest, was feeling significantly better. Wade is expected to return for Tuesday's game against Golden State.

Mike Miller and Eddy Curry were inactive Saturday night. Spoelstra said Miller will participate in his first full-contact practice Monday. Curry has not yet been cleared for contact, but Spoelstra said he was pleased by Curry's improved conditioning.