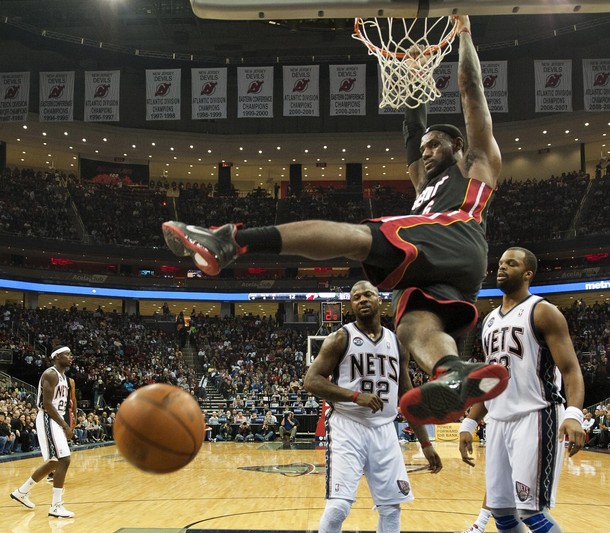 LeBron James was named Eastern Conference Player of the Week for the second straight week of the shortened NBA season, leading the team to a dominant 8-1 record on his way to yet another MVP-caliber season.

James helped the Heat to a 3-1 week, leading Miami in scoring in all three contests in which he appeared. James averaged 31.0 points on .607 shooting from the field, to go along with 9.3 assists, 7.3 rebounds and 1.33 steals. James' 33-point, 13-assist double-double keyed Miami's largest win of the week, a 118-83 victory over Indiana on Jan. 4. After sitting out the contest against the Atlanta Hawks on January 5 due to a sprained left ankle, James dropped in 22 points in the first quarter at New Jersey on January 7 while on his way to posting 32 points, nine assists, seven rebounds, two steals and a block in the 101-90 victory. Additionally, the 22 first quarter points were only one point shy of tying the HEAT franchise first quarter record and only two points shy from tying the franchise record for points in any quarter.

Here's LeBron's recap of the week:

LeBron has now earned 33 Player of the Week accolades in his career, the most times a player has earned the honors in NBA history. It also marks the 35th time in franchise history a HEAT player has earned Player of the Week honors and the seventh time James has earned the honor as a member of the HEAT. James has currently scored at least 30 points in six-straight road games, a new HEAT franchise record for consecutive 30-point games on the road. He also has shot at least 55 percent from the field in every contest he has appeared in this season, which is tied for the fourth-longest streak, and the best by a non-center, in Miami's history.

Here's a nice "season in review" video recap courtesy of "The Hoop Doctors":