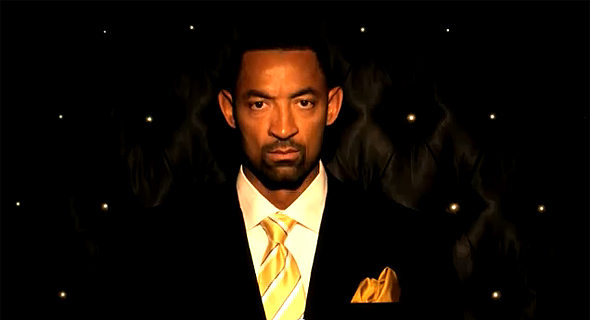 So, uh, what’s up with Juwan Howard? One has to ask the question, after he played all of one minute in the marathon triple overtime victory over the Hawks Thursday night. Normally, Howard’s lack of playing time wouldn’t be news worthy, but with the injuries the Heat have dealt with thus far, combined with the short Atlanta cameo – something seems to be up.

As of Monday, Howard has logged just 30 more minutes than Eddy Curry on the season, which isn’t good, considering Curry has yet to dress for a single game while still battling a nagging hip flexor injury. Second-year center Dexter Pittman has seemed to replace Howard in the rotation. Starting with Miami's game against the Indiana Pacers and 7-foot-2 center Roy Hibbert Jan. 4, Pittman's minutes have increased. After logging nine minutes against Indiana, Pittman played for 12 minutes against Atlanta and received seven minutes of playing time against the New Jersey Nets while centers Brook Lopez and Mehmet Okur sat out injured. A Heat fan simply has to wonder what led to Erik Spoelstra's decision to substitute Pittman for Howard in the rotation, even when a formidable center like Hibbert doesn't play on the other team.

Has his game fallen off that much, or is he dealing with some sort of injury the Heat have yet to make public? Does Spoelstra know Howard isn’t a relief pitcher, and it is legal for Howard to enter and re-enter the game, at his discretion? Is he in Spoelstra’s dog house? If so, did Michael Beasley leave anything in there for him to eat? Ugh, so many questions.

One has to believe the minutes won’t be any easier to come by in the nearing weeks, as Mike Miller (two healthy thumbs up!) and Eddy Curry (popped collar, awkward smile) return. If Howard can’t find the court for more than one minute in a 63 minute Atlanta game with Mickell Gladness, Dwyane Wade, LeBron James, Mike Miller, and Curry in dress suits – then when can he? At one point in time the Heat signed Howard to a $100 million-dollar deal that was later voided by the NBA, yet when finally a member of the Heat he barely plays - even Alanis Morissette finds that ironic. In the end Howard’s true value to this team, may just be where he has been the majority of his tenure with the team – off the court.