Share All sharing options for: Superstar LeBron James is now a comic superhero

Ever fantasized about what it would be like if what LeBron James said at the Heat introductory pep rally ("not one, not two...") really did come true?

Wonder no more because ESPN The Magazine will be releasing their annual NBA Preview issue and it will come with a special 12-page Marvel comic book featuring the MVP and NBA FInals MVP in a not-too-distant future in his quest for a dynasty in Miami. 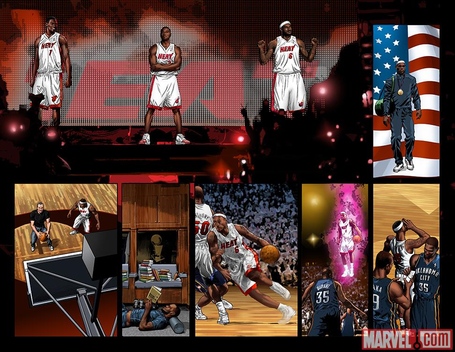 On Marvel.com, ESPN The Magazine senior editor Ty Wenger shed more light on the story that he personally wrote.

"We tried to play off the known story lines of LeBron James and his career. So for one title for example, we have him engaged in obsessive levels of self-improvement as he is want to do, including learning how to shoot free throws underhand ala Rick Barry and how to levitate, perform magic tricks, these types of things. In another title, he's forced to lose Dwayne Wade and Chris Bosh due to luxury tax implications so he has to form a new team that includes a zombie Shane Battier!" 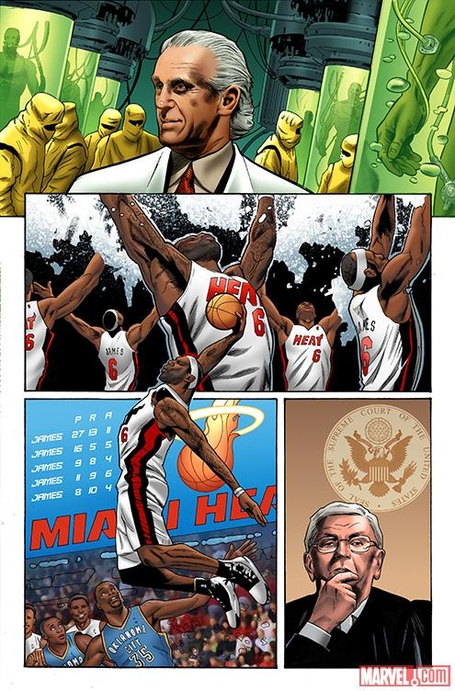 "We have another season in which due to his chronically cramping quads he actually designs and builds his own bionic legs," Wenger continued. "Then Pat Riley gets a sample of LeBron's DNA that he surreptitiously borrows, as we say, from one of LeBron's sweat-soaked headbands. And then unbeknownst to LeBron, he raises a team of LeBron James clones. As you can guess, thanks to the awesome Marvel visuals, each season gets more and more surreal." 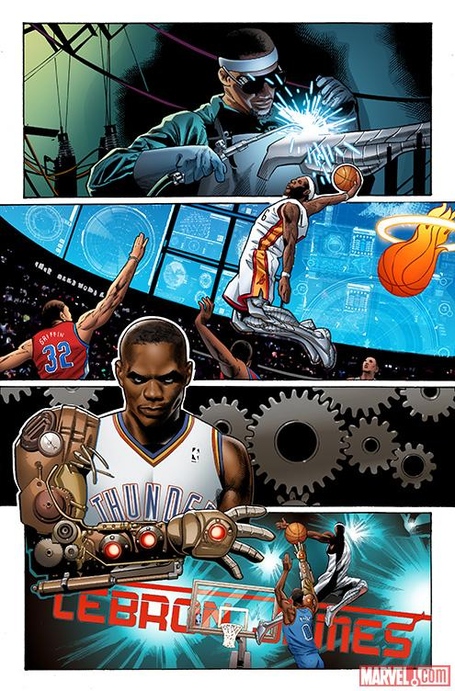 Honestly, I'm still not sure what the heck is going on in these preview samples of the artwork (I mean, a cyborg Russell Westbrook?), but maybe it all makes sense in the context of the story. Or not. Still, it just might be a fun way to past the time while anxiously waiting for the season opener when LeBron James officially gets his first ring.

Turns out that this was precisely the best time to release a comic book featuring the Chosen One, as explained by Marvel Deputy Editor Otto Strong.

Additionally, the series will also be available digitally and in several languages including Spanish, Portuguese, and Mandarin Chinese.

Hot Hot Hoops will be getting their hands on this soon and we'll try to make sense of all of this, even while keeping a watchful eye on the present day LeBron James as he prepares for his quest to repeat as the champ. Who knows, maybe Pat Riley really is working on a clone. 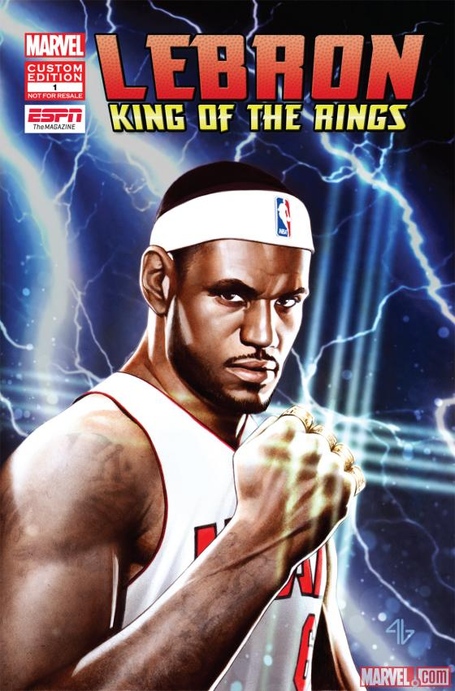