In the second part of the series, we will take a look at Norris Cole's development and whether the Heat should continue to give him more playing time at the expense of Mario Chalmers. Is Cole-Train making a push?

Continuing on, we don't need any introduction to the second part of the Rotation Deliberation series, given that we already explained everything in our power forward evaluation.

I'm also quite sure everyone knows how I feel about Norris Cole, given this. It wasn't scathing, but I had to lay out the facts about how bad Norris Cole was (And still is, actually).

In fairness, however, some things have developed since then. For one, Norris remains terrible on offense. But really, he is dominating opposing point guards on the defensive side of the floor and evolving into a stopper. I have acknowledged that he is a pest on defense before, but he's simply swallowing people these days.

We'll get to that a bit later.

First, we'll put out the mathematics everyone is so eager to see, and focus more on how Cole compares to Mario Chalmers, the Heat's starting point guard, and whether Cole's recent uptick in minutes is warranted.


What does this say?

One look at these numbers confirms the trend we've come to know since this duo of point guards have been paired up in Miami. Chalmers is the superior offensive player. Even amidst an early season struggle, Chalmers is closing in on his career 3-point shooting mark of 36 percent this season. He shot 39 percent last season and gives the Heat's starting lineup, one that does not currently start Shane Battier, the only spacing it has on the floor when the ball is on LeBron James or Dwyane Wade's hands.

In addition to this, Chalmers, although not a passing savant, is clearly a better creator than Cole, who struggles to create for others with any consistency and see the floor beyond his tunnel vision.

Most of Cole's inefficiency is the fact that he simply cannot finish at the rim.

He's shooting 46 percent from there this season after barely eclipsing the 50 percent mark last year (Via Hoop Data). Chalmers, on the other hand, is shooting a more proficient 65 percent at the can and was around 60 the previous two seasons. On average, among point guards that have played in at least 10 games this season on more than 20 minutes per game, the average field goal percentage at the rim is 59.5.

In fact, Cole is a below average shooter from nearly every area of the floor. 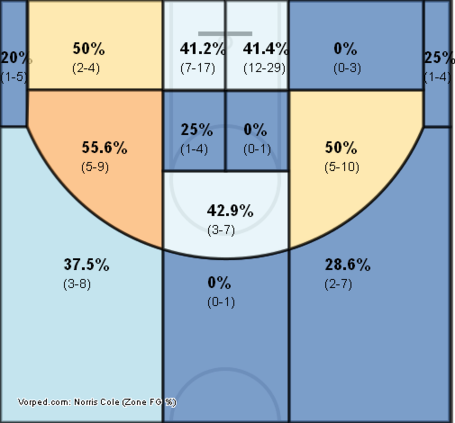 Aside from making 10-of-19 shots from the elbow's and having made 2-of-4 shots from the left corner mid-range, Cole can't finish inside or out. His only niche so far has been in between, which isn't statistically a shot of very much value. A look at the same chart from Chalmers indicates five sweet spots, and a sixth treat being that he's shot 5-of-12 on right elbow three pointers, which adjusted, is worth more than 50 percent anyway.

This is all based on only one-fourth of a season, but it's also a trend that is being continued from a larger sample.

You know what these statistics don't say though? They do a very poor job of measuring defensive ability, if they even do at all. Defensive Win Shares is an inconsistent, imprecise measure that doesn't truly rate an individual players defensive production because of how it only accounts for team defense when a player is on the court.

And clearly, Cole is impacting games with his defense these days, and has been studier than Chalmers has.

My favorite moment this season for him was the way he bothered J.J Barea a few days ago, but Couper Moorhead did a fantastic job of detailing some of the thing's Cole does well on defense here (It's really worth the read if you're into that kind of stuff).

The point is, although offensive efficiency is the biggest part of the game, it is not everything, and if we're going to compare Cole and Chalmers' impact, we have to take into account Cole's monster defense.

According to Synergy Sports Data, Cole is holding opponents to 27 percent shooting (0.63 points per possession!). Cole has more than held his own on isolations (17.6 percent) and pick-and-roll defense (26.6 percent). Simply stated, Cole is erasing people. Chalmers, on the other hand, has been pedestrian this year on defense. He has been stout in the past, remains a disruptive presence because of his knack for steals and is far from a liability, but he's not bringing the focus and intensity, and most importantly, production, that Cole is bringing on that side of the floor right now.

Let's look at how their presence correlates with team production:

As I mentioned earlier, I believe offensive efficiency is more important than anything, including an individual perimeter defensive player. So the question then becomes, is the summation of what Cole brings to the table more impactful than what Mario does, and in turn, should he keep playing as much or more...or even start?

We'll start with this:


Before we talk about this, we have to acknowledge that much of Cole's time on the floor has been with second unit lineups. Nonetheless, these splits give us an indication of how much these players impact the game.

The relationship between their individual production and the team's production when the are on the floor is strikingly parallel. It jumps off the page how much better Miami is on offense when Chalmers is on the floor on offense, and we can see a noticeable gain when Cole is out there on defense.

It matches up almost identically. Cole is really bad on offense, and the team is nearly five points per 100 possessions worse for it. On the flip side, roughly the same margin is taken into account with defense, cancelling out his porous offense and ending up with a slightly plus difference. So, in all fairness to Norris, he is cancelling out his unproductive play on one side of the floor with that awesome defense, at least by this inexact measure of team production when he's in the lineup.

With that said, there is a misconception at times about Cole's impact. There is a notion that he pushes the pace sparks the team, sometimes getting them going on offense. This is simply untrue. Cole doesn't come into the game and provide any positive offensive impact, despite what we may perceive with our eyes.There is no merit to the assertion that he jumpstarts the offense. The only merit that exists to back Cole's game is his defensive play at the moment.

When Chalmers is in the game, the Heat offense is five points better, and when Cole is, they are five points worse.

Miami is outscoring people by nearly 10 points when Mario is in the game, and there is a five point difference per 100 possessions when Chalmers plays.

Cole, despite closing the gap with defense, is still providing extremely marginal value. The Heat are 0.4 points better with him on the court.

So, assuming Cole is really going to be an absolute defensive stopper and his offense will remain around the levels it has been during his short career, he still hasn't been better than Chalmers on a bad year.

Chalmers is averaging 25 minutes per game this season and Cole is averaging 20. Come playoff time, that should tilt a few more minutes, at least, in Chalmers' favor, and an argument can be made that is should happen now, barring a matchup with a point guard the Heat need to stop.

Cole has gone from having a profoundly negative impact to having a lateral one. He deserves some credit for that and it's certainly become acceptable for a backup point guard. However, if you think he should be starting, closing in on Chalmers' minutes, or should continue to play most of fourth quarters, you're doing it wrong.