Heat forward Shane Battier is leveraging the only offensive skill he has in the tank into a very productive shot, and his minimalist game is a perfect fit for his team.

There was a time when Shane Battier could put the ball on the floor and create offense for himself, at least a little bit. He's always been a limited offensive player, but there used to be the threat of more than the outside spot-up shot.

Nothing has changed in the style of Battier's game, who for years has used the advanced data in opponent scouting reports to locate, and take, shots from the most efficient areas of the floor. What has changed is the difference in shot selection between 2-point shots and 3-point shots. It's become an even more extreme differential than before, when his game was already mostly made up of spot up shooting.

Battier has attempted 125 field goals in 23 games this season. 110 of those have been 3-pointers.

Battier has made 53 shots overall, and 48 of them have been 3-point makes.

We're just about a third into the season and a regular rotation player has only made five shots inside the arc. The veteran of 12 seasons essentially never shoots a 2-point shot these days.

It's rarely good news when a players athleticism fades and the effectiveness of his skill set diminishes, so what does this mean for Battier and his team?

The limitations of the 34-year-old forward, and the construction of this Miami Heat roster, has pushed Battier to not only take one shot, the 3-pointer, but to disproportionately only use one area of the floor for it, the corner.

And the Heat are punishing people with it.

There is research that suggests that the corner 3-pointer is arguably the most efficient shot on the court. For one, it's slightly closer (22 feet) than the 23 foot, nine inch distance other 3-pointers have.

If you wanted a player to be a specialist, you would pick the corner 3-point shot.

And Shane Battier is that guy. 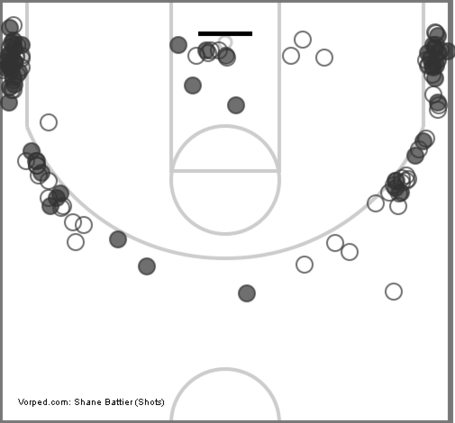 As you can see, (the gray dots are the shot makes) Battier is consistently using the corners as a weapon. According to NBA.com, Battier is shooting 52 percent from the corners and only 32 percent on 3-pointers outside of that.

Battier takes most of these 3-point corner attempts from the left wing, where he has drained 20-of-36 shots as of Dec. 26. In fact, coming into the Heat's win at Charlotte yesterday, 30.2 percent of Battier's overall attempts have come from that left corner and 21.8 percent from the right, meaning that over half of his overall shots come from the corners. A smaller chunk of his shots come from 3-pointers above the break, with next to nothing coming inside.

Looking around the NBA, there are a slew of efficient specialists out there who are using the power of the corner 3-pointer, but none of them have the disparity Battier has between the corner and every other shot. From Battier's teammate Ray Allen to Kyle Korver, Matt Bonner, Kevin Martin, Anthony Morrow, Jason Kidd or any other shooter that comes to mind, nobody is getting as high a percentage of their attempts from the corners.

In his role, Battier is choosing to limit his attempts to his sweet spots. He has that luxury on a team that doesn't depend on him for any volume scoring.

But the question then also becomes, with a player who literally is only looking to shoot from one place, isn't it easy to take away?

There are a few answers to this. Firstly, playing with Dwyane Wade and LeBron James and their consistent penetration to the rim makes looks on the perimeter commonplace. Secondly, Battier is playing power forward more than at any point in his career, and it is a difficult proposition for post players to step out and guard that shot.

But those reason's alone don't tell the whole story. That would ignore the work he does to get these shots.

To his credit, whether it be running ahead of the pack in transition to get to the corner by himself and fire away, or sneaking away to his spot when his defender takes a step forward in help side defense, Battier is finding ways to get to his spots.

Take a look at a shot earlier in the year at Denver on Nov. 15:

To start the possession, Battier is in a favorable matchup with Nuggets big Kosta Koufos. A Mike Miller and Chris Bosh pick-and-roll got Chris Bosh isolated with guard Andre Iguodala on the right elbow and he goes to work. 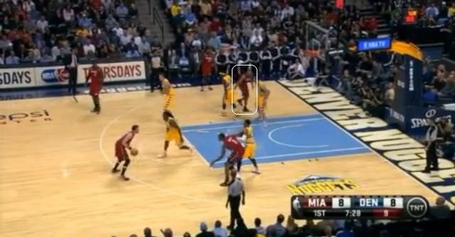 As Bosh initiates the offense in the post, the Heat clear out the whole right side of the floor and shrink the court to a one on one game. Notice Battier in his favorite spot: The left corner. 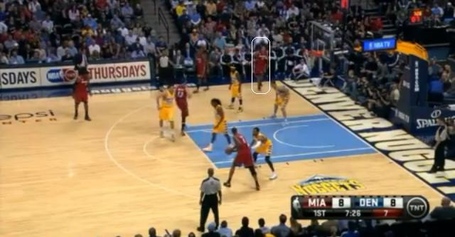 Understanding the mismatch, Iguodala alertly swipes at the ball and dislodges it from Bosh's hands, leaving it to roll to James at the top of the key. By now, Battier adapts to the broken play and cuts baseline as Koufos leaves his back to him, and right into a wide open corner 3-pointer on the other side of the court. 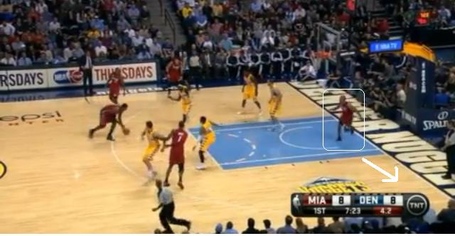 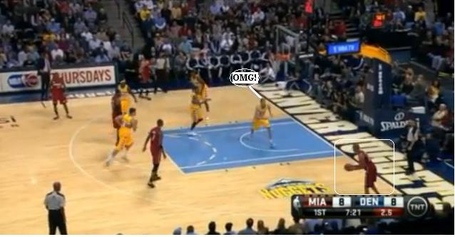 This could have been a designed play, except its doubtful the Heat would run a baseline cut on a post up and momentarily clog the paint. This seems more like Battier being aware of the situation and capitalizing.

Watching the Heat play, there have been several instances where Battier sneaks around and gets himself enough space to grab a pass and take good looks from his spots. He's a big part of the reason Miami's inside-out combination of explosive wing's who get in the paint and pinpoint shooters are wreaking havoc on the association.

Battier is shooting 43.6 percent from beyond the arc on the season, and it's why his 42 percent completion rate from the field says nothing about his impact on offense. He's shooting a career high in Effective Field Goal Percentage, which adjusts the value of the 3-point shot, by a mile, at 61.6 percent, because he doesn't take 2-pointers anymore.

Calculated from the corner spot alone, this Battier shot is as efficient as a lay up from one of the best finishers in the game right now.

Shane Battier may be a limited offensive player, but his limitations are a perfect fit for Miami's core of stars, and he's excelling at the one single most useful shot in the game.