"What started out as a joke has turned out to be a disaster."

Sure, I stole that quote from the ill-fated Apollo Creed-Ivan Drago bout in Rocky IV, but Stu Nahan might as well have been describing Wednesday night's Heat-Bucks game. 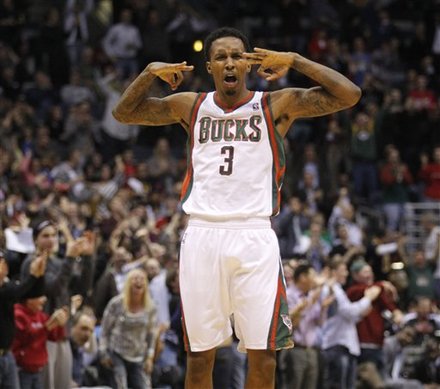 Brandon Jennings (9-for-25, seven three-pointers, 31 points, 8 assists, 4 steals) scored 14 in the fourth quarter, including a 9-point burst over a 2:15 span, as the Bucks pulled away from a lethargic Heat squad. Milwaukee repeatedly broke down Miami's defense, assisting on 30 of their 39 field goals. Heat head coach Erik Spoelstra said, "Defensively, we did not put together multiple stops like we're capable of in the second half."

James (14-for-24, 40 points, eight rebounds, five assists) was the lone bright spot for Miami, and even he experienced his share of struggles, committing seven turnovers. Despite such a gaudy statline, James shot just 6-for-15 over the final three quarters while tallying two assists. The Heat's ball movement was noticeably poor, particularly in the second half. "Rather than move the ball and execute triggers, the ball was sticking and stopping," Speolstra said, "We're much easier to defend when that happens." James took responsibility for some of the Heat's second-half struggles, saying, "I think we were pressing a little bit down the stretch, trying to be too aggressive."

Turnovers were once again an issue for the Heat, who entered Wednesday night with the league's 10th-highest turnover rate. Spoelstra said, "We still have a long ways to go as a ballclub, just in terms of playing consistently. To start the third quarter, there was a carelessness with the ball." Miami committed 17 turnovers to Milwaukee's 12. Dwyane Wade (8-for-17, 23 points, 8 rebounds, 6 assists) summed up the Heat's turnover problem more succintly. "We gotta take care of the ball," Wade said. Chris Bosh had a quiet night,scoring just 9 points on 4-of-10 shooting.

The Heat will travel to Philadelphia to take on the Sixers (16-6) Friday night at 7. The Sixers have won 5 of their last 6 games.

Prior to the game, ESPN's Brian Windhorst reported that the Heat have offered contracts to free agents Kenyon Martin and Joel Przybilla. The Sun-Sentinel's Ira Winderman tweeted that Przybilla, who is reportedly choosing between the Heat and the Chicago Bulls, is leaning towards signing with Miami. Mickell Gladness, whose rookie contract is not guaranteed, would likely be the first player jettisoned should the Heat sign either Martin or Przybilla. Windhorst also reported that the Heat would likely retain Eddy Curry, so the next most likely candidates to go would be Terrel Harris (who is also playing on an unguaranteed contract), Dexter Pittman and Juwan Howard.