Heat Pull Away from Wizards in Fourth

Share All sharing options for: Heat Pull Away from Wizards in Fourth

Friday's Heat-Wizards affair was beginning to resemble what has become a familiar template for many a Heat victories this year: highlight-heavy first half, lackadaisical third quarter, unnecessarily close final period. Thankfully, they decided to skip that final part. 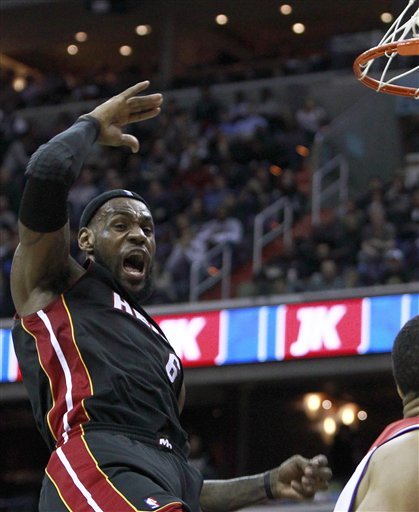 The Wizards threatened Miami in the third quarter, using a 13-2 run to cut what had been a 12-point deficit to a 64-63 Miami lead on John Wall's jumper with three minutes remaining in the period. Miami's subsequent 19-5 run squelched any hopes of a Wizards victory, however, and the Heat coasted from that point on.

Heat head coach Erik Spoelstra said of the team's late-game effort, "The most encouraging thing, particularly in the fourth quarter, was the way we were able to execute our offense and trust each other to get open shots."

The Heat opened a 10-point halftime lead on the strength of a trio of highlight reel plays Dwyane Wade engineered. First, Wade went behind his back to split a double team at the top of the key and finished with a 360-degree layup over Wizards center Javale McGee. A couple alley-oops to LeBron James followed, the second of which consisted of a no-look hook lob, which James finished with one of his trademark violent one-hand smashes. "When he takes off, all I've gotta do is throw it up," Wade said. "He (James) makes me look good. That's what the fans came to see." Asked whether the Heat got too lob-happy, Spoelstra said, "We have a team that feeds off electric plays, and that's fine. I'm not gonna pull the reigns on that." James added, "It definitely fuels our team when we get out in the open court."

Miami shot 21 for 23 (91%) from the free-throw line, a notable improvement from the 77% clip the team had shot entering Friday's contest.

Shane Battier had his best performance of the season, scoring 10 of his 15 points in the fourth quarter. Battier, who entered the game shooting just 32% on the season, shot 6-for-9 from the field and hit three of his six three-point attempts. Spoelstra said of Battier's breakout game, "We were never panicked about him, and he does so many little things we like. It was nice to see the ball go in for his sake. He's too proven a player, it was just a matter of time." Udonis Haslem hauled in 12 rebounds for a bench corps that was effective throughout the game, shooting 13-for-28 (46%) and 5-for-10 on threes.

The Heat now travel to Atlanta for a Sunday matchup with the Atlanta Hawks (18-9). Sunday's matchup begins the Heat's first back-to-back-to-back of the season, with games at Milwaukee and Indiana the following two nights. "This is a tough trip for us," James said. "But everybody has to do it. And if there's one team I'd want to be on the road for ten days with, it's this one."