Does Dexter Pittman have a future in Miami?

Share All sharing options for: Does Dexter Pittman have a future in Miami?

Erik Spoelstra may have used Eddy Curry against Andrew Bynum and Pau Gasol last month, but he played Dexter Pittman in Wednesday’s game against Dwight Howard. Recently, neither of the Heat’s burly centers have managed to get on the court, with the Heat going small when Joel Anthony exits the game. Spoelstra has preferred to use Chris Bosh or even Udonis Haslem, an undersized power forward, at the five. Against JaVale McGee Friday night, Spoelstra again went to the second-year player from Texas, not the 10-year NBA veteran. 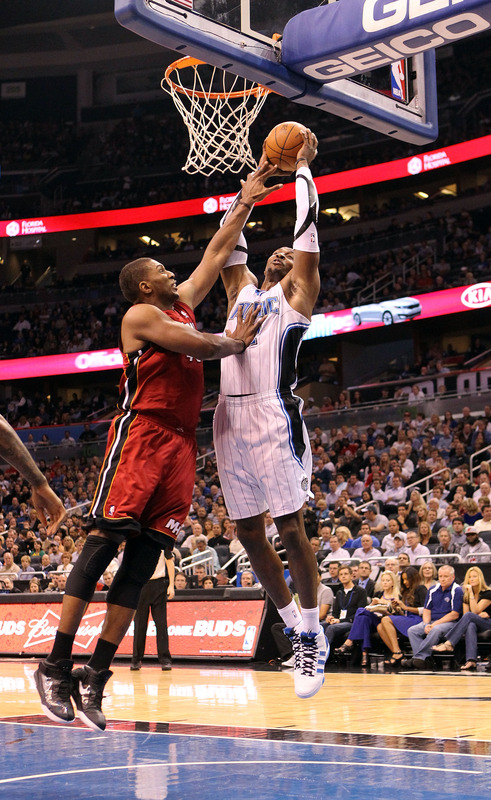 Pittman played in six straight contests in January but didn’t play well enough to cement a spot in the rotation. He has offered some glimmers of hope recently, though. The 32nd pick in the 2010 NBA Draft grabbed four rebounds in each of the last two games, playing 11 minutes in both contests. He even had a nice hook shot against the Wizards. Of course, he has also committed an average of 4.5 fouls in the last two games. On one play against Washington in the second quarter, LeBron James loudly castigated Pittman for keeping his hands down defending McGee, picking up a foul in the seconds before halftime.

On the positive side, Pittman looks like he's lost some weight since his appearances in January. Curry seemed to be in better shape than him when the Heat played against the Lakers, but Pittman certainly looks slimmer than he was earlier in the year. In fact, he says that he’s lost 35 pounds since the start of the season and now weighs 280 pounds.

The young center’s stated goal is to become a rotation player this season. If he plans to do that, he needs to continue to lose weight. The Heat don’t need a lumbering 300-pound guy; they need a 6-10 center who can run the floor to keep up with Miami’s rotations defensively and their fast-break game offensively.

Someone on the Heat roster has actually done exactly what Spoelstra and Pat Riley would probably like Pittman to do: Udonis Haslem. He was a chubby 6-8 player in college, but lost weight and stands now as a chiseled 235-pound power forward who has the quickness to fit in Miami’s schemes. Now, it remains to be seen whether Pittman can ever develop the foot-speed to become a rotation player instead of a situational one.

Moreover, Pittman’s job is far from secure beyond this season; he will be a free agent next summer. Joel Anthony has four years left on his contract, and the Heat will probably draft a power forward/center this June. The Heat already have two young point guards and quite possibly the best, deepest wing rotation in the NBA, so Riley should absolutely acquire a big man who can run the floor in the draft.

Moreover, the Heat may use the taxpayer mid-level of $9 million over three years on a center. No one in Miami’s range really stands out (Nazr Mohammed?), and Riley may even take a chance on the injury-prone former No. 1 pick Greg Oden. Riley reportedly tried to sign him last December, and Portland may finally want to move on from him.

With Anthony returning and quite plausibly a free agent and a rookie coming in, Pittman’s future in Miami is far from certain. If he wants to keep his job, he needs to continue to lose weight and avoid getting careless fouls.