Heat surge by Bucks in second half

Share All sharing options for: Heat surge by Bucks in second half

The Miami Heat (22-7) entered Milwaukee (12-16) for the middle game of the team's back-to-back-to-back set looking for revenge after having dropped the first two games against Milwaukee this year, and revenge they indeed had. Behind LeBron James’ 35 points and eight rebounds on an incredible 16-of-21 shooting from the field the Heat were able to finally settle the score with the Milwaukee, winning 114-96. The win pulled the Heat to within a half-game of the idle Chicago Bulls for first place in the Eastern Conference. Miami is now 22-7, equaling the best start in franchise history after 29 games. 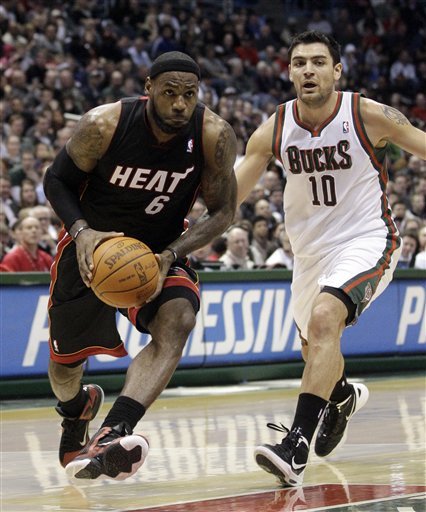 Following a 91-82 victory in Miami on Jan. 22, Milwaukee beat Miami 105-97 on Feb. 1 at home despite a season-high 40 points from LeBron James, 24 of which came in the first quarter. It looked like more of the same in opening minutes as the Heat had four early turnovers, and the Bucks ended the first quarter with a 30-27 lead. Milwaukee continued to give the Heat trouble from the 3-point line early, especially Carlos Delfino who finished the game with a team-high 24 pts (5-8 from 3). Behind a solid second quarter from Dwayne Wade and James, the Heat were able to go into the intermission leading 55-50.

The Heat came out of the locker room guns blazing, behind 16 third-quarter points from James. He consistently worked out of the post, turning and fading away for jump-shots. The Heat scored a game-high 35 points in the third, James capping the quarter with a thunderous dunk. After a few minutes in the fourth the Heat rested James, who finished playing just 31 minutes, as well as Dwyane Wade and Chris Bosh, who totaled just 26 and 30 minutes, respectively.

The Heat finished the game 43-81 (53%) from the field, while converting 7-14 (50%) from the 3-point line, compared to the Bucks 33-84 (39%) and 9-23 (39%) from three point land. In support of James rim-shaking dunks and terrific all-around game, Dwyane Wade finished with 22 points and five rebounds, while Chris Bosh had a very quiet game – finishing with just 8 points. However, Bosh showcased an uderrated part of his game, passing, finding James for two dunks out of the high post. Mario Chalmers had a solid night from the floor, finishing 5-of-7 from the field for 13 points. Mike Miller made three first-half 3-pointers for nine points, and Udonis Haslem and Shane Battier each chipped in seven.

The Heat were able to limit Brandon Jennings to 4-of-10 shooting for just 12 points, a far cry from influence Jennings had in the last game against the Heat, when he finished with a team-high 31. In that game Jennings made seven threes, but on this night he would hit two early and then go cold.

The Heat head to Indiana to take on the Pacers Tuesday night, looking to sweep this grueling back-to-back-to-back road set. The Heat defeated Indiana 118-83 January 4 at the American Airlines Arena, riding a game-high 33 points, eight rebounds, and thirteen assists from James. In that prior matchup with the Pacers, the Heat were without injured superstar Dwyane Wade.