Share All sharing options for: Heat blow out Pacers, 105-90

This is getting scary. For the third consecutive night, the Miami Heat (23-7) went into their opponent's arena and sent a convincing message: get out of our way. This time, the victims were the upstart Indiana Pacers (17-11). The final score read 105-90, but it wasn't that close. Last year, Miami jumped out to a 22-point first quarter lead in Indianapolis only to blow it and scrape out a 7-point win. There would be no such drama Tuesday night. 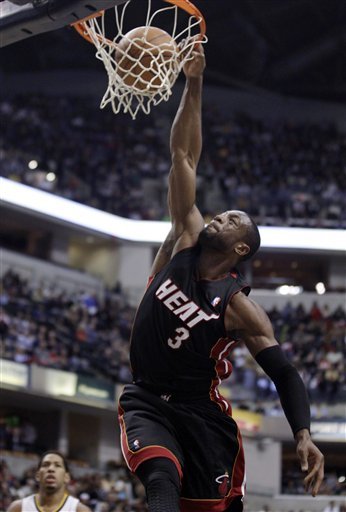 With the win, the Heat became the first team in 41 years to sweep a back-to-back-to-back set on the road. The last team to do it, the 1970-71 Milwaukee Bucks, ended up winning the championship that year. That fact was not lost on the team heading into the game. "Our guys wanted this challenge," Spoelstra said. "This is something we were looking forward to, to catapult us to another level. It was a breakthrough moment for us in these three games."

Miami led 30-14 after one quarter and didn't look back, stretching the lead to 68-39 by halftime. Miami shot 24-for-40 (60%) from the field in the first half and held the Pacers to 34 percent shooting (14-for-41) during that span. The Heat's ball movement in the first half was world-class, as the team showed no effects of playing its third game in three nights. James and Wade, having averaged about 30 minutes each in the previous two games, appeared to benefit from the added rest. The nightly highlight occurred in the second quarter when Wade led a fastbreak with James streaking down the left side of the court. A no-look lob resulted in a powerful 2-hand finish from James, who nearly posted a triple-double in just 33 minutes of playing time. James tallied 23 points, 9 rebounds and 7 assists, and had a game-high +/- of +27. James, who arrived at the arena four hours prior to tip-off Tuesday, said, "My mindset was to get in here early and just dominate." Wade played an efficient 24 minutes, shooting 6-of-12 for 16 points, 6 rebounds and 3 assists. Chris Bosh shot a ragged 3-for-9 from the field for just 13 points, but he did hit seven of his eight free-throw attempts.

Particularly encouraging was the fact that Miami successfully defended the three-point line, holding Indiana to 2-for-15 (13%) shooting from beyond the arc. The Heat had struggled to defend the three-point line recently, allowing the Magic to hit 17 and the Bucks to hit a combined 19 in their two recent meetings.

Mario Chalmers aggravated his left hand injury that held him out of last Wednesday's game against Orlando in the second quarter, but Miami didn't miss a beat when Norris Cole took over. With a large contingent of friends and family members in attendance, Cole shot 8-for-12 from the field, matching his season and career-high with 20 points off the bench. "He's an aggressive player, a guy who looks to make plays," Spoelstra said. "You root for guys like that." Shane Battier was effective again, making all three of his field-goal attempts, including a three-pointer. He finished with eight points and four rebounds.

Miami is now 4-1 on this road trip, with the last four victories coming by a combined 70 points. The Heat will get a couple days to rest before finishing the six-game trip at Cleveland Friday night. Dexter Pittman, still ailing with a bruised left shoulder suffered in Sunday's win at Atlanta, sat out Tuesday's game.