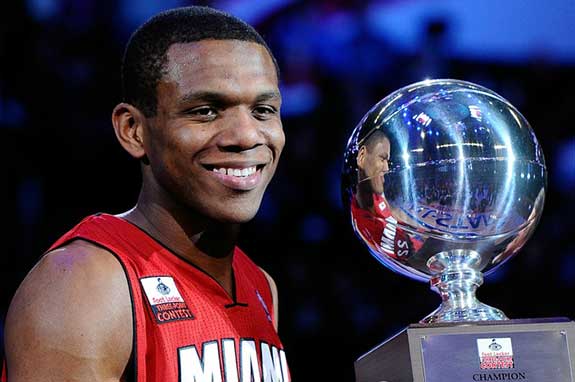 NEW YORK, Feb. 15, 2012 – Reigning champion James Jones of the Miami Heat will defend his title in this year's Foot Locker Three-Point Contest, which will be held on Saturday, Feb. 25, at Amway Center in Orlando as part of NBA All-Star Saturday Night. Rounding out the field are All-Stars Joe Johnson of the Atlanta Hawks and Kevin Love of the Minnesota Timberwolves, Ryan Anderson of the hometown Orlando Magic, Anthony Morrow of the New Jersey Nets, and Mario Chalmers of the Heat.

Last year, Jones bested a field that included the Boston Celtics' Paul Pierce and Ray Allen -- Pierce captured the title in 2010, while Allen, the 2001 winner, is the career leader in three-pointers made. Jones' 20 points in the final round topped Pierce's 18 and Allen's 15. Previous winners include: Jeff Hornacek, Jason Kapono, Mark Price and Peja Stojakovic who won two titles each; while Larry Bird and Craig Hodges each captured three straight.
Jones, the reigning 2011 NBA Three-Point Shootout Champion, became the fourth HEAT player to win the contest, joining Cook (2009), Kapono (2007) and Rice (1995). In the 2011 contest, Jones scored 16 first round points to advance to the second and final round. Jones shot first in the final round, scoring 20 points as he out-shot the rest of the field to capture the 2011 title.

The players will compete in the two-round competition with the top three finishers from the first round advancing to the finals. Five shooting stations will be set up around the three-point line, with four Official Spalding NBA game balls worth one point each and one Spalding NBA All-Star 2012 commemorative "money ball" worth two points at each location. Each player will have one minute to shoot as many balls as he can. In the final round, players will shoot in ascending order of first-round scores. At the discretion of the referee, television instant replay may be consulted for clarification of rules compliance.

The Foot Locker Three-Point Contest will be televised live nationally as part of the NBA All-Star Saturday Night presented by State Farm, which will also feature the Haier Shooting Stars; Sprite Slam Dunk; and Taco Bell Skills Challenge. TNT and ESPN Radio's national coverage will begin at 8 p.m. EST from Amway Center. The NBA All-Star Game on Sunday, Feb. 26, will air live on TNT, ESPN Radio and in more than 200 countries and will be broadcast in more than 40 languages.

Foot Locker, the title partner of the Three-Point Contest since 2004, is a part of Foot Locker, Inc., a specialty athletic retailer that operates approximately 3,400 stores in 22 countries in North America, Europe, Australia, and New Zealand. Through its Foot Locker, Footaction, Lady Foot Locker, Kids Foot Locker, Champs Sports, and CCS stores, as well as its direct-to-customer channels, including Footlocker.com, Eastbay, and CCS.com, the Company is the leading provider of athletic footwear and apparel.

Following is a list of the year-by-year winners and the 2012 Foot Locker Three-Point Contest roster:

(Statistics through games of Monday, Feb. 15)