Despite rumors, LeBron James will stay in Miami

Share All sharing options for: Despite rumors, LeBron James will stay in Miami

Yahoo! Sports’ Adrian Wojnarowski reported today that LeBron James sent an emissary or two to tell Cleveland Cavaliers owner Dan Gilbert that he’d like to return to play for his former team in the summer of 2014, when he can opt out of his contract. This report comes on the heels of James saying that although he is happy in Miami, he won’t rule out a return to Cleveland. 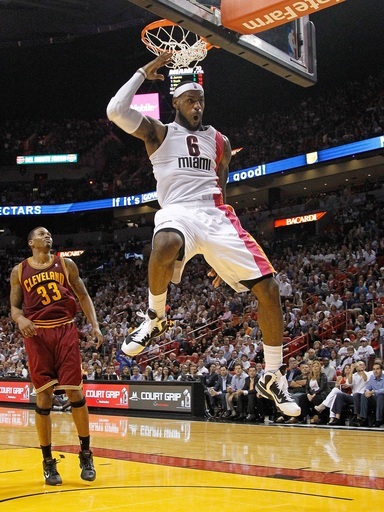 For some observant Miami Heat fans, this story all seems manufactured. In fact, James said six days after "The Decision" that he could see himself returning to the Cavaliers in an interview with GQ Magazine. His statement from the GQ article and his comment at a Heat practice yesterday are nearly verbatim, both saying that if the fans welcomed him back, it’d be a great story.

James should have just said, "I’m just focused on winning a championship for Miami" (what he said today) from the beginning. James wouldn’t appreciate Pat Riley openly discussing the idea of trading James for Dwight Howard. But it is strange that the media only picked up on this story now, even though he’s expressed similar sentiments in the past.

Additionally, Wojnarowski said in his column today that James started to doubt his decision moments after "The Decision." He referenced Sam Amico’s report last month that James wasn’t keen on Pat Riley’s structure for the team. Hmm. That’s quite a leap from Wojnarowski’s article from January saying, "James appears to have grown in Miami, meshed with Pat Riley’s far more rigid Pat culture. James needed that." By the way, Amico said "[James] doesn’t particularly care for the heavy-handed and disciplined style of team president Pat Riley," five days after Wojnaroski said that James has fit in with Riley and his culture.

Some in the media have said that James is simply repeating the comments he made in the months leading up to July 2010, leaving the possibility open for leaving the Cavaliers. But here’s how I approach it: James is the guy who said that he envisioned winning multiple championships in Miami. He also played far below his averages in the 2011 NBA Finals, when the Heat had fourth-quarter leads in Games 2 and 4. Before he even thinks about leaving, he needs to win a few championships (plural, not singular). And why would James leave Miami after winning a championship (or two, or three) there? Why would he leave his great friend Dwyane Wade for the Cavaliers? He thus has a catch-22: he needs to win championships in Miami to redeem himself for his performance last year and to make good on his prediction to win multiple rings. But if he starts to put rings on his fingers, why would he leave?

Even Wojnarowski created an escape route in his column, saying that James could feel entirely different tomorrow than how he feels today and that Dan Gilbert won't respond to the alleged message James' emissaries sent to him. If James does end up playing for the Cavaliers again, it would probably end up conjuring up memories of Michael Jordan’s last years as a Washington Wizard. But then again, at the Heat practice yesterday he even said that he’d hopefully retire as a Heat player.