Prior to Friday night's game, the dry erase board inside the Cleveland Cavaliers' locker room read, "Hit First." Needless to say, they did not hit first. Or at all.

The Miami Heat (24-7) stormed out to a 20-2 lead in the game's first six minutes and never looked back, polishing off their 5-1 road trip with a 111-87 win over the Cavs (11-17). After opening the trip with a loss at Orlando, the Heat won the final five games of the trip by an average of 19 points. The five-game winning streak is Miami's third of the season. Heat coach Erik Spoelstra said, "It was a good end to this road trip. Our guys were really looking to this (the trip) as an opportunity to take a legitimate step forward, and we did that. The guys feel it, it's tangible. We hope that this isn't our only breakthrough." 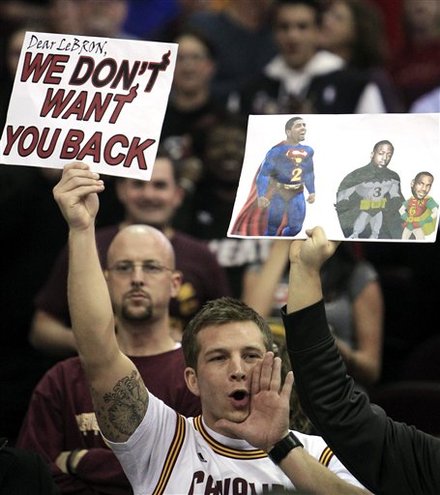 Despite indicating a day earlier that "it would be great" to someday play for Cleveland again, LeBron James was lustily booed everytime he touched the ball. The vitriol had little effect, however, as James scored 28 points on 11-of-19 shooting and added five rebounds and five assists. James responded in a similar fashion in his first game in Cleveland as a visiting player last season, scoring 38 points in that contest. The Cavs' faithful actually seemed more interested in booing James than cheering for their own team, although, to be fair, they didn't have much to root for. Miami led 35-14 after the opening period and 63-38 at halftime.

Dwyane Wade scored 22 points on 7-of-10 shooting from the field and 7-of-9 shooting from the foul line, throwing up a lob to James early in the game. Chris Bosh found James on a lob in the third quarter, later making two tip-dunks in the fourth quarter and finishing with 16 points and 12 rebounds.

"What we're trying to develop is a balanced attack," Spoelstra said. "I think all the guys in the locker room feel genuinely closer, and feel a genuine purity about the way we're playing. The last five games could be, arguably, the best that we've moved the ball offensively this season. We'll be at our best when we can take advantage of all the options we have.

While Yahoo!'s Adrian Wojnarowski reported (guessed?) earlier in the day that James was already planting the seeds for a return to Cleveland following the 2013-14 season, James sounded like a man who was ready to get back to the sunshine of South Florida after the game. When told by Sun Sports' Jason Jackson that the Heat had been on the road for the past twelve days, James responded, "Feels like two months! South Beach, Brickell, Biscayne Bay, Coconut Grove...we're comin'!"

Miami reached double figures in three-pointers made for only the second time this season, hitting 14-of-21 from beyond the arc. Mario Chalmers hit four 3s, and James Jones practiced for the 3-Point Shootout next week with two triples. The Heat made 16 of their 26 attempts behind the arc in a January win over the Spurs. Miami's bench scored over 30 points for the fifth consecutive game, a stat which can be attributed to both improved play and increased playing time. The recent string of blowouts have meant more rest for the Big Three and more burn for the second unit. The Heat now head home for a three-game homestand prior to All-Star Weekend. Miami will host the Magic Sunday afternoon at 3:30 on ABC.