Heat get revenge, blow out Magic

Share All sharing options for: Heat get revenge, blow out Magic

After possibly their worst loss of the season – a 102-89 decision in Orlando two weeks ago – the Miami Heat reeled off five straight blowout wins. When the Heat had a chance for vengeance Sunday afternoon, they won the way they have recently – in blowout fashion. 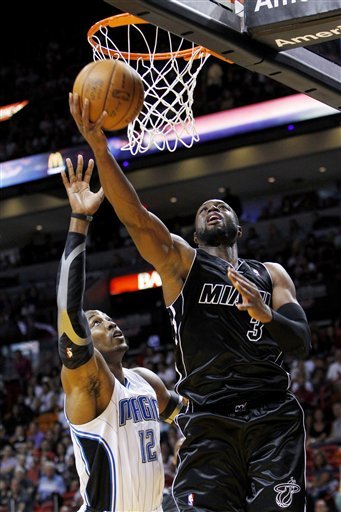 Leading for nearly the entire game, the Miami Heat built up a 20-point fourth-quarter lead to cruise to a 90-78 win over the Orlando Magic. Owners of the NBA’s best record at 25-7, the Heat have now won six straight games by double figures. President Bill Clinton sat next to Heat owner Micky Arison for the game, receiving a Heat jersey during a second-half timeout to applause.

Dwyane Wade and LeBron James were sensational against the Magic, starting the game off with two alley-oops. The first one came on a James lob pass from half-court for a two-handed dunk. Wade scored a team-high 27 points on 13-of-23 shooting from the field to go along with six rebounds, two steals and three blocks in just 31 minutes.

James struggled against the Magic earlier this month, but registered 25 points on 9-of-14 shooting from the field and six-of-seven shooting from the foul line with 11 rebounds and eight blocks. For one possession in the fourth quarter, he even defended Dwight Howard – and did it quite well. Who else has the versatility to defend anyone from Derrick Rose to Howard? James’ acrobatic dunk with three minutes left in the game sealed the win.

The Heat’s two superstars attacked early, but Chris Bosh wasn’t involved and never found a rhythm. He had a particularly disappointing sequence to open the second quarter, missing two shots at the rim – one against Quentin Richardson and the other against Glen Davis. On the positive side, Bosh did grab nine rebounds in 31 minutes of action. Miami won the battle of the boards 48-40 despite 15 rebounds from Howard.

Udonis Haslem shook off a poor shooting first half to finish 5-of-11 from the field for 10 points and five rebounds. He made a baseline jumper to end the third quarter to put the Heat up 16, helping to the shift make-up of the game from a moderate-sized lead for Miami into a blowout.

Against the Magic Feb. 8, Howard registered a 20-point, 20-rebound game while Orlando’s shooters nailed 17 treys. Sunday afternoon, Howard scored just 12 points – making just 2-of-10 shots from the foul line. Hedo Turkoglu and Jameer Nelson had horrendous shooting nights, combining for just 2-of-15 shooting from the field. J.J. Redick was the only shooter who had a good night, making five 3-pointers. James guarded Redick to open the game – with Wade on Turkoglu – and closed out late to him a few times. When Shane Battier checked into the game for Wade, he defended Redick and gave the former Duke standout little space to operate every time he touched the ball. James needs to do that.

The Heat will host the Sacramento Kings Tuesday night at 7:30 p.m. on NBATV.