Share All sharing options for: LeBron James named Eastern Conference Player of the Week for the fourth time this season 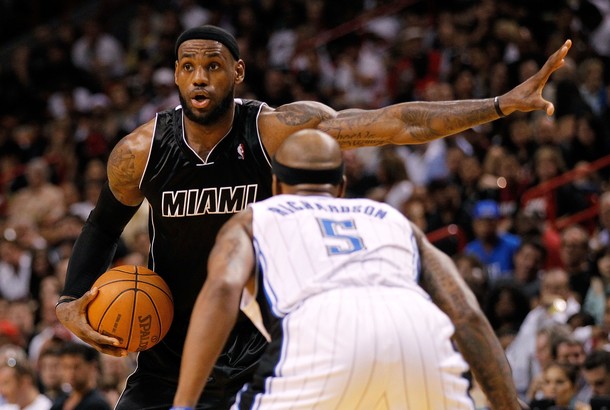 In the second game of a three-night back-to-back-to-back set on February 13, James scored a game-high 35 points on 16-of-21 (.762) shooting from the field, tying his single-game career-best percentage (with a minimum of 20 field goal attempts) while also grabbing a game-high eight rebounds, dishing out three assists and recording a steal in 32:54 minutes of action in the 114-96 win at Milwaukee. In his third game in as many nights, he recorded game highs in points (23), rebounds (nine), assists (seven) and steals (four) in 33:24 minutes in the 105-90 victory at Indiana on February 14, helping the HEAT become the first team since the 1970-71 season to win three consecutive road games on three consecutive nights - all by double figures. He then tallied a game-high 28 points, a game-high five assists, five rebounds, a steal and a block in 30:08 minutes at Cleveland to capture the 111-87 win. In the 90-78 victory vs. Orlando on February 19, James posted a 25-point, 11-rebound double-double while dishing out a game-high eight assists and recording a game-high two steals in 36:38 minutes of action.