The Miami Heat entered the fourth quarter with just a five-point lead Tuesday night against the Sacramento Kings – unlike other games on Miami’s current winning streak – but still notched their seventh consecutive double-digit win in a 120-108 decision. This 26-7 record for the Heat stands as the best 33-game start in franchise history. 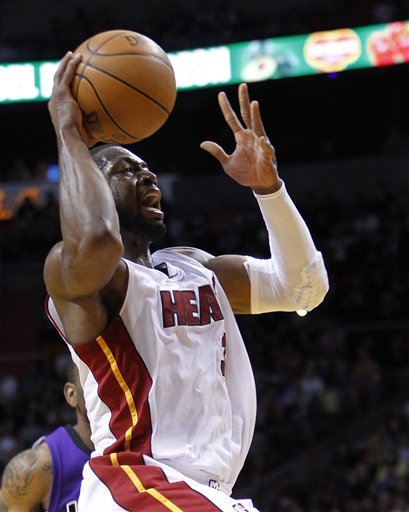 Six Miami players scored in double figures, but Dwyane Wade scored a game-high 30 points on 11-of-16 shooting from the field, 8-of-10 shooting from the foul line, 10 assists, three steals and two blocks. Towards the end of the first half, LeBron James blocked an Isaiah Thomas layup, starting a fast-break. James passed the ball to Wade, who made an incredible and-one. Moments later, James blocked another layup attempt – this one from Francisco Garcia – and then threw a long alley-oop pass from the free-throw line to Wade, who converted on the layup. The play was reminiscent of the famous Wade-to-James full-court alley-oop last season. The one player standing between LeBron James and the MVP award may just be James’ own teammate.

Chris Bosh rebounded from some recent sub-par performances to finish with 20 points on 7-of-14 shooting from the field and 6-of-7 shooting from the foul line and 10 rebounds. The Heat ran plays for Bosh early in the game, establishing a rhythm for the power forward. Bosh also defended one of the better centers in the NBA, DeMarcus Cousins, quite well Tuesday night. The promising yet volatile center had just nine points and seven rebounds. Even against Dwight Howard or Cousins, Erik Spoelstra has opted against using Dexter Pittman or Eddy Curry and instead shifted Bosh to the five. With James playing the four well in stretches, the Heat’s power rotation looks fine.

The leading candidate for MVP had just 18 points, but did it on 7-of-11 shooting from the field and rested for the first eight minutes of the fourth quarter. The Kings hung around with Miami in the third quarter – thanks to Thomas making five 3s in the period for 20 points – but the Heat extended the lead in the fourth with James and Wade on the bench. Bosh, Norris Cole (12 points on 5-of-7 shooting), Mike Miller (2-of-4 from downtown) and Udonis Haslem made nice offensive plays to keep Sacramento at bay. Haslem passed Rony Seikaly for second all-time on the Heat’s rebounding list Tuesday night, needing just two to move up. Haslem grabbed seven boards tonight, including a thunderous tip-dunk in the fourth that excited James and Wade from the bench. Haslem also added 10 points.

Mario Chalmers scored 20 points -- including six 3-pointers -- in just 29 minutes for the Heat. He and James Jones will participate in the 3-Point Contest this Saturday.

The Heat will have tomorrow off before facing Jeremy Lin and the New York Knicks in Miami’s final game before the All-Star break at 7 p.m on TNT.