Udonis Haslem for Mayor of Miami

Share All sharing options for: Udonis Haslem for Mayor of Miami 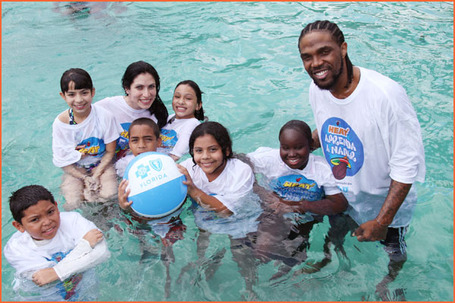 One Miami Heat topic that is buzzing around today is Udonis Haslem and the idea of him running for Mayor of Miami. It's a funny idea at first, but then you really have to take a good look at it because if he really wants to, Udonis will take a run at it. When asked about it, Haslem said that he definitely is giving the idea some thought. Said Haslem:

"I plan on it. I hope so. I definitely know what I need to fix. The youth is where it starts at -- misguided, mislead and also misunderstood. I'd definitely start at the bottom."

The idea started on Tuesday night following the Heat's win over Sacramento. During his post-game interview, Coach Erik Spoesltra made an off-hand comment about Haslem one day being Mayor of Miami, and that sparked the media approaching Udonis and asking him about it.

Be aware that a vote for Haslem could very well also be a vote for teammate James Jones. Jones represents the NBA Players Association as their secratery-treasurer and would likely be the first player on the team thought of as a candidate of office. He and Haslem have discussed the scenerio before and it seems that they have similar ideals.

"Me and [James Jones] think about it," Haslem said. "If I run for mayor then somehow I've got to figure out a way to involve J.J. He's from the community as well and we both care a lot about this community, its youth and these kids."