Share All sharing options for: Heat bottle up Lin, Knicks

The NBA’s newest media darling, Jeremy Lin, came into American Airlines Arena leading his team to a .500 record at 17-17, including impressive wins over the Los Angeles Lakers and Dallas Mavericks. Lin and the Knicks had a chance to prove themselves against the best team in the Eastern Conference, but the Miami Heat informed the Knicks that they aren’t playoff contenders yet. 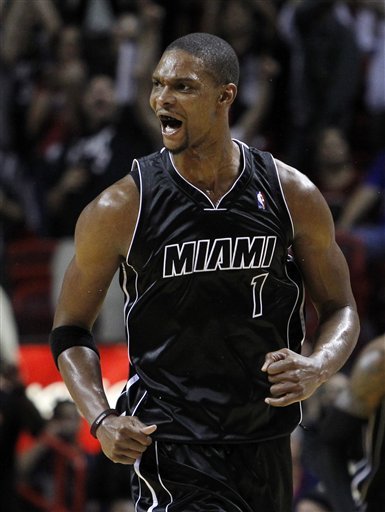 After an evenly-played first-half, the Heat established a good lead in the third quarter and never relinquished it, winning their eighth straight game 102-88. Miami won all of those games by 12 or more points and moves to 27-7 on the season, tied with Oklahoma City for the best record in the NBA.

The Heat essentially used the same game plan that frustrated Derrick Rose in the 2011 Eastern Conference Finals on Lin, and it worked very well. The Heat always trapped Lin on his pick-and-rolls and forced him to his left. He shot just 1-of-11 from the field, unquestionably registering his worst game since he began playing regular minutes. LeBron James never needed to defend Lin because Mario Chalmers and Norris Cole did such a good job on him. In two separate instances, the Heat’s two point guards each stripped the ball from Lin and went in for two-hand jams. Lin committed eight turnovers Thursday night.

Joel Anthony also deserves immense credit for his trapping on Lin on the pick-and-rolls. On one third-quarter possession, Anthony trapped Lin on a high pick-and-roll, recovered to guard Tyson Chandler and subsequently blocked a floater attempt from Lin. The Heat’s starting center blocked five shots, helping contribute to an active Miami defense that recorded 10 blocks and 12 steals.

Although Amar’e Stoudemire moved past Chris Bosh on one early possession and dunked the ball in the game, Bosh dominated the match-up with the man some said Pat Riley should have signed instead of Bosh. The former Georgia Tech standout made 11 of his 17 field goal attempts for a game-high 25 points and eight rebounds. Tonight, Bosh was reminiscent of the way he played in the 2011 Eastern Conference Finals, nailing jumpers and making nice drives to the basket. Stoudemire had just 13 points and five boards.

Dwyane Wade scored 22 points on 10-of-22 shooting – ending his streak of 11 games shooting 50 percent or better from the field – to go along with five rebounds, five assists and two steals. He missed some point-blank attempts early, but made numerous buckets in transition, including following up a James missed layup with a slam dunk. In the final minutes, he threw a long pass to James for a dagger dunk.

The leading MVP candidate halfway into the season was energized for the game, deflecting passes and blocking shots to open the game. James finished with 20 points on 7-of-16 shooting from the field and 6-of-6 shooting from the foul line to go along with nine rebounds, eight assists, five steals and two blocks. He took some ill-advised shots, but his turnaround jumper to close the third quarter put Miami up 14. Although James has struggled against Carmelo Anthony in the past, he won the battle Thursday night, as the Syracuse standout shot 7-of-20 from the field.

Aside from their stellar defense, Chalmers and Cole combined for 18 points on 7-of-15 shooting. The Heat had the two best point guards in the game Thursday night, as Lin and Baron Davis combined to shoot 1-for-18 from the field. Shane Battier added eight points, including two 3-pointers, in this game. Spoelstra played Battier much more than Miller, who only logged 11 minutes compared to Battier’s 24. Udonis Haslem chipped in eight points and nine boards.

For All-Star Weekend starting Friday, Cole will participate in the Rising Stars Challenge Feb. 24, James Jones and Chalmers will compete in the 3-Point Shootout Saturday and James, Wade and Bosh will represent the East in the All-Star Game Sunday.